There is a noticeable spring in my step. Whether this is because spring may well be in the air, or a seasonal side-effect of the recent Welsh Santes Dwynwen Day followed by the Roman St Valentine – whichever floats your roses – I am definitely more buoyant. And with another famous Saint’s day looming, my sense of hwyl is blooming along with the daffs.

I’m no match for Wordsworth, clearly, but wandering lonely through the stacks, I gazed and gazed until my thoughts turned to our patron saint. Dewi Sant, as he is known in Welsh, was born at Mynyw, which was named St. David’s after his death on the 1st of March, c. 589.

Image from Richard Fenton’s, A Historical Tour Through Pembrokeshire, (London, 1811).

For those of us who went to school in Wales, our Welsh costumes may well be our most residing memories of St. David’s Day. These articles of Welsh couture were so vital to this cultural event that they had to be specially ordered and collected from the local couturier, Dame Du-ôr, famous for her millinery and brethyn designs for young and old since the Battle of Fishguard in 1797. J’adore a bespoke bonnet, though I always felt the boys missed out with their simple felt-pinned leeks. Shame the brethyn couldn’t stretch to some short trousers.

Style aside, most of what we learned of our patron saint was gleaned from Buchedd Dewi (Life of David), written by Rhygyfarch, Bishop of St. David’s during the late 11th Century. A renowned teacher and preacher, Dewi naturally commanded his fair share of miracles, the most famous occurred as he was preaching at the Synod of Brefi, when the ground suddenly raised up beneath him so that he could be better heard amongst the crowd, and a white dove descended on his shoulder. Today, the church of Llanddewi-Brefi marks the very spot.

For me, however, the most enduring element of Dewi’s story was the fortitude of his mother, Nonnita, or Saint Non. A local lord, on hearing of her pregnancy and the predictions surrounding the mystical powers of the child, plotted to have him killed at birth. But on the day of her labour, a great storm raged making it impossible for anyone to go outside. Only the  place for child-bearing remained calm, bathed with a serene light. It is said that Non’s pain was so intense that as she grasped the rock on which she rested, her fingers marked the stone as if they were impressed in wax, and the rock, in sympathy with her, split in two, one half leaping above her head and the other at her feet, protecting her at the moment of birth. Not even a Queen Bey can top that! (Yes, Beyoncé, you heard me).

This got me thinking of another single lady in popular Welsh legend. Known by her poetic name: the Maid of Cefn Ydfa, Ann Maddocks (neé Thomas, 1704 – 1727), was the daughter of William Thomas of Cefn Ydfa, Llangynwyd, Glamorgan, and his wife Catherine Price, aunt to the Welsh philosopher and preacher, Richard Price (1723-1791). An interesting character in his own right, Richard was a champion of liberal causes at home and abroad, in particular the American war for independence and the equality of women. He was a close friend of Benjamin Franklin and Thomas Jefferson, and Mary Wollstonecraft, who attended his services in Newington Green. It was through Price that Mary came into contact with the radical publisher Joseph Johnson, and her Vindication of the Rights of Woman (1792) was influenced by Price’s own arguments on equality for women.

‘Wil Hopcyn singing one of his chosen songs at Cefn Ydfa’, from the novel by Isaac Hughes, Y Ferch o Gefn Ydfa, (Cardiff, 1881).

Oh, but I digress with a smooth-talking Welsh philosopher! I’m sure I’m not the first nor the last, but we shall have to meet again in a future post for I was telling you about his fair cousin, Ann. Following the death of her father, Ann was placed in the wardship of a local lawyer named Anthony Maddocks, and later forced to marry his son, also named Anthony. According to tradition, Ann was in love with a local farm labourer and bard named Wil Hopcyn. When this was discovered they were forbidden to see each other, and Ann was confined to her chamber as the match between her and Anthony was arranged. They continued their courtship by writing secret letters to each other which Ann’s servants would place in the hollow of an old tree near the manor of Cefn Ydfa for Wil to collect and then place his own. This stratagem was soon discovered by Ann’s mother, who confiscated her writing materials. So in love was Ann that it is said she wrote to Wil upon a sycamore leaf, with a pin dipped in her own blood. But alas, it was not meant to be, and Wil left Llangynwyd shortly after Ann’s enforced wedding took place on the 4th of May, 1725.

It was a firmly held belief that one night during his absence, Wil had a dream that Ann’s husband had died, and returned to Llangynwyd the following morning. But on his return, he discovered that it was in fact Ann who was dying, having pined so desperately for her true love that she had fallen gravely ill. Hearing of his return, Ann’s mother and her husband sent for Wil in the hope that he would alleviate Ann’s suffering. Tradition claims that she died in his arms that very day. Wil never married, and died in 1741. Both he and Ann are buried at Llangynwyd Church.

Now don’t be too downhearted people, for this is the way many a Welsh love story of old goes, and it doesn’t end there, for in true Welsh style we have poetry, song, and literature to commemorate the tale. 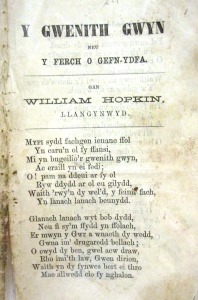 The collier and novelist Isaac Hughes (1852-1928) published his novel, Y Ferch o Gefn Ydfa, based on the story in 1881, while traditions surrounding the tale were judiciously recounted by the antiquary T. C. Evans, better known as Cadrawd, in his History of Llangynwyd Parish in 1887. Furthermore, Bugeilio’r Gwenith Gwyn (Watching the White Wheat), is one of Wales’ best known folk songs, attributed to Wil himself, it supposedly captures the tale of their tragic love affair.

The lyrics were collected from oral tradition in the 1830s, and first published in Welsh by the musician and folklorist Maria Jane Williams, herself an accomplished singer, guitarist and harpist, in her prize-winning work   Ancient national airs of Gwent and Morganwg, (Llandovery, 1844). (Let’s just say, if the Eisteddfod handed out Grammys, this lady would have won a few.)

They also formed the basis of the opera written by one of Wales’s most famous composers, Joseph Parry. Parry was offered a chair at Cardiff University in 1888, and The Maid of Cefn Ydfa was performed at the Grand Theatre in Cardiff in 1902.  His composition Blodwen, was the first Welsh-language opera, yet he is best known for his work Myfanwy, yet another song supposedly based on a tale of young love! It is a favourite piece of many a male voice choir, and I can confirm that this is indeed the best way to hear this beautiful melody.

Saints and choirs were always a given for St. David’s Day, yet behind all of these accomplishments lies the feats and fortitudes of some remarkable women. So as Queen Bey herself would say, put your hands up for Non, Mary, Ann, Maria and of course Dame Du-ôr, and never, ever underestimate the statement a song, a saint, or a well fitted bonnet can make. Dydd Gwyl Dewi Hapus pawb.

And don’t forget, if you’d like to hear more about the history of women in our collections, join us on March the 8th to celebrate International Women’s Day.