Our latest exhibition was launched at the opening of the Livres d’Artistes: The Artist’s Book in Theory and Practice conference. It showcases the generous donation of artists’ books from Ron King and the Circle Press, gifted to Special Collections and Archives in 2014. Sample images from the exhibition are featured below, with captions taken from an interview with Ron conducted by Cathy Courtney (1999), which looks back on his career in book arts.

Contracted at this time to create print editions for Editions Alecto, London, I persuaded them to take on this first book [The Prologue (1967)]. On completion of the work with their imprint on the title page and stamped logo on the reverse of the images, they suffered a financial set-back and I was forced to take on publication myself as Circle Press.

I had been working on a series of mask prints, and I knew this was a solution I wanted to explore for the Chaucer rather than attempting to ‘illustrate’ it… The abstract mask provided the opportunity to express the pilgrims through the merging of symbols – symbols taken from heraldry or the Church, for example – rather than caricature. The Parson, for instance, is not just himself but also a symbol of the Church, just as the Knight is the symbol of ruthlessness and (at the same time) vulnerability but also, in heraldic terms, of the Crusade… I used colour to put certain moods across; for instance, the Knight is grey, black, and silver and rather rusty, whereas the Squire is bright and gaudy.

There was a room in the Victoria and Albert Museum that was devoted to artists’ books in [the 1960s], and some of them had a deep influence on me. Matisse’s Jazz (1947) moved me tremendously, a revelation in the strength of its colour, the economy of its drawing, the exciting presentation of something that had been worked out in cut paper and reproduced by a hand-cut stencil technique in a way that vitalized rather than diminished it… Miró’s A Toute Epreuve (1958)… had a strong influence on the second book I did, The Song of Solomon (1969)

Bluebeard’s Castle (1972-73) marked the beginning of [my] collaboration with the poet Roy Fisher [and] my first step away from the traditional book format… The extraordinary thing was that within three weeks of my having sent Roy a mock-up of the book, he had written a text in which we only changed one word. I’d never met him… I designed the whole thing, and making it was incredibly masochistic. Absolute hell. The difficult thing about a work like Bluebeard’s Castle is to translate the dummy into something that can be manufactured or constructed in an edition. I remember sitting at a desk and just cutting and chopping and gluing and looking at all kinds of different pop-up material until I turned out the first room, the Torture Chamber. Once I got the idea that to make something pop-up you have to have symmetrical folding structure, I began experimenting in various ways.

Ronald King, Roy Fisher
Bluebeard’s Castle (1972)
Based on the opera by Bartok, the visual theme of the book is represented by nine pop-up constructions; the portcullis, the castle and seven secret chambers with the verse incorporated into the design printed in Optima. 125 signed copies – 30 x 20cm made up of 10 loose 4pp sections silk screened throughout onto Hollingsworth paper placed into a cardboard folder and held in a black Perspex tray with a clear lid. Guildford, 1972.

I was born in Brazil in 1932. The Carnival was a three-day event just before Lent and was visually very powerful. I loved the spectacle of the fancy dress, the masks and hobby horses. I spent a lot of times making paper toys and kites. Kites have a tremendous masklike presence, and they have appeared in my adult work; for instance, I used them in my Antony and Cleopatra (1979).

The Left-Handed Punch (1986) and Anansi Company (1992) are the two most elaborate books Roy and I worked on. The Punch is my favourite of all the books I’ve done; it holds together better than Anansi and has more dimensions. Punch’s moveable puppets, on-stage descriptions, the large chunks of the original Cruikshank version of the text, and the drawn Victorian tableaux scenes (spoofs of famous drawings and paintings) all fit together easily, and the photo montages and collages are relieved by the inclusion of the poet’s (Roy’s) handwriting to strong effect.

Ronald King, Roy Fisher
The Left-Handed Punch (1986)
The fifth collaboration of artist and poet in a modern version of the Punch and Judy drama. Entirely screen-printed with the exception of the introduction, titles and colophon, which were printed letterpress in 14 pt Baskerville. 80 signed copies made up often 4pp French-folded sections – 38 x 28cm on Somerset mould-made paper. The six scenes and epilogue (which include 1 articulated puppet designs) are held in cartridge paper folders within a red cloth-covered folder inserted into a hand-printed striped cloth slipcase. Guildford, 1986.

The Anansi book is more spectacular with its removable puppets made of wire and card – the whole book is like the Brazilian Carnival scene as I knew it, lots of noisy music and revelry coming from all directions. 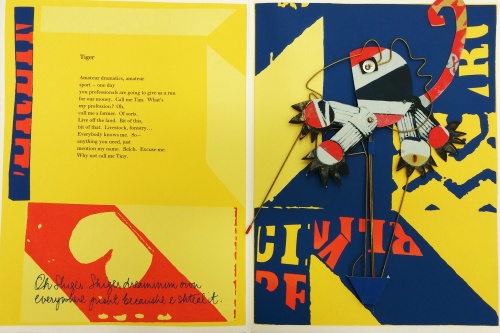 If I am to criticise other works, I would say that, too often, one look through is enough! That does not mean that I can’t enjoy that ‘one-look’ type of book; not only do I have a large collection of them, but my own wire-printed productions, Turn Over Darling (1990) and Echo Book (1994), are books of that nature… I try to make even those ‘one-look’ books tactile and pleasing to handle and the printing relevant to the content. As in good speech, the message is not enough, the quality of delivery is vital.

Ronald King
Echo Book (1994)
A small booklet with the words ‘ECHO BOOK’ printed in wire and blind-embossed to read ‘BOOK ECHO’ on the reverse of the page. The impression fades as the pages are turned in sequence. 75 signed copies with three 4pp sections – 20 x 8cm of Khadi hand-made paper and an unsigned and unlimited edition with two 4pp sections, both sewn into a blind embossed black paper cover. London, 1994.

Although I was never a wholly traditional printer, I was closer to that stand-point when I began than now, when much of what I do might be described as the work of an experimental book artist. For many years now I have been using materials such as wire, wood, mirror and stone and exploring the elasticity of the book form itself. In selecting slides for lectures, I’m often aware of how my approach to the book form has developed. From the conventional solution of image and text in the format of the Chaucer Prologue in 1967 – through pop-up books, mirror books, wire-embossed books with double images, stone books, sawn and laser-cut ones – to the hollow log which I cut earlier this year into forty sections and bound in the inner ring to make four quarter-circle books that fit together into the original log form, is a long way.

Ronald King
Log Books: Hollow Log (1995)
An on-going project, begun in 1995, for a series of book-works which explore the possibilities of sawing a log of wood into book sections, or pages, which can be reassembled into their original log form. In the case of Hollow Log, pages are cut from the circumference of a hollow log, divided into four codex-bound books of equal size. 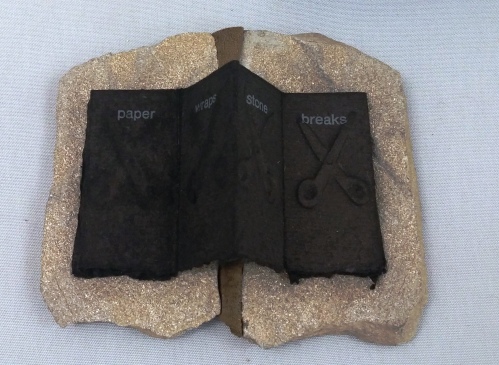 Ronald King
Hick Hack Hock (1996-7)
A series of book-works varying in size (7 x 5cm – 13-18cm) based on the ‘paper, scissor, stone’ game. The scissors are blind-embossed onto a concertina of hand-made black paper with split stones (which act as covers) adhered to both ends of the folded pages. Text printed letterpress in 8 pt Helvetica. Each book contained in a hinged custom-made box. London, 1996-7.

Many thanks to those who have already registered for the conference Livres d’Artistes: the Artist’s Book in Theory and Practice. For those who have yet to do so, the last day for booking at the discounted rate is FRIDAY 13 NOVEMBER. Conference registration will cost £60 (£25 student/unwaged) until Friday, and £75 (£40 student/unwaged) after that date. A booking form can be downloaded from the website.

Call for Papers: The Art of the Book, Cardiff University, December 4-6 2015 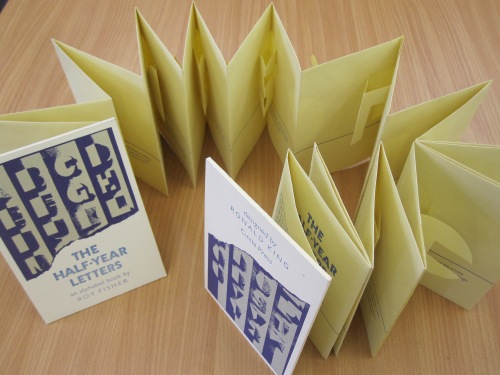 In 2014 Cardiff University received a considerable donation of Artists’ Books from Ron King of the Circle Press, one of the most influential practitioners of the Book Arts. In December of this year, the University’s Special Collections and Archives (SCOLAR) will be hosting a major international conference to celebrate this bequest. Speakers will include Ron King (Circle Press), Sarah Bodman (University of the West of England), and Chris McCabe (Poetry Library).

Proposals are now invited from practitioners and scholars for presentations of 20 minutes on any aspect of the Book Arts. A brief biographical note, along with an abstract of 200-300 words, should be sent NO LATER THAN October 1, 2015, to scolar@cardiff.ac.uk. Practitioners in attendance are encouraged to bring examples of their work for display at the conference.

Ron King was born in Brazil in 1932. He entered the Chelsea School of Art in London in 1951. He launched his Circle Press in 1967 with his work, ‘The Prologue’ from Chaucer’s Canterbury Tales. An innovative artist, he was also an innovative entrepreneur, and made many trips to North America where there was a ready market for his artist books. After many international exhibitions, and working with over one hundred artists and writers in the intervening years, and producing well over one hundred pieces of work, Ron King retired from publishing in 2009. He kindly donated his personal collection of artists’ books to Cardiff University in 2014.

“The idea for my first book came from a visit to the National Art Library at the Victoria & Albert Museum. There, for the first time, I viewed the French beaux livres, Matisse’s ‘Jazz’, Miro’s ‘A Tout Epreuve’, and Derain’s illustrations for a book by Rabelais”.

“In New York on a trip in the early seventies I bought a pop-up version of ‘Pinocchio’, published by Random House, ostensibly for my children. It was to set me off in an entirely new direction as far as the concept of the book was concerned”.

“The [Circle] Press has been highly productive for over forty years and has had a profound effect, directly and indirectly, on other artists working with books, for it has provided a continuity and a context against which such activity can be measured”. 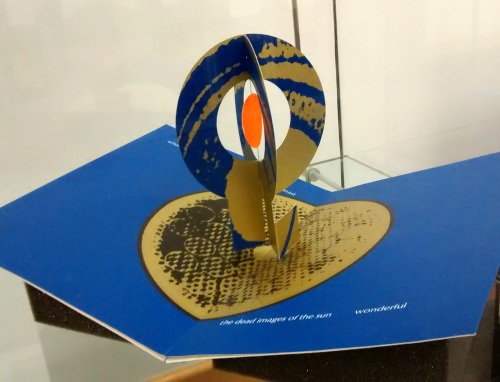 “Ron King is a maker. He is not just an artist – though that is his primary identity – he is a craftsman capable of turning his hand to the ready solution of practical problems … It is in this quality of inspired fabrication that his real genius resides”.

“An artist’s book is a book produced under the direction of an artist. The word ‘artist’ is used broadly: the artist may be a visual artist or a text-based conceptual artist; he or she may normally work with other media or they may be an artist solely on the basis of their work as a ‘book artist’. An artist’s book may be produced by a fine press but also as easily by the artist or by an associated studio, gallery or collective”.

Cardiff is the only UK university to receive a donation of nearly all of the Circle Press works – Ron King’s other main collection is at Yale University in the USA, in the Yale Centre for British Arts. Cardiff University is also a leading UK centre for research in illustration studies for 19th century printing, and it is home to one of the largest arts and crafts Private Press book collections in the UK.

Some methods used in image or illustration production in artists’ books – 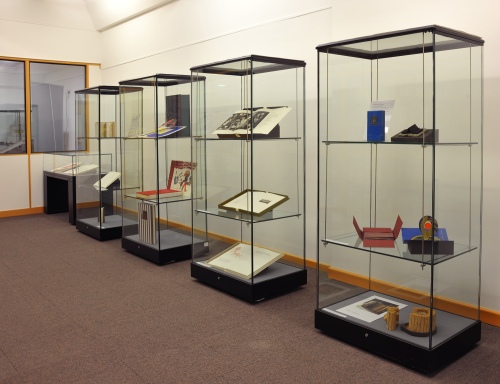 Items displayed in the exhibition include: