The Benefits of Cleaning House; or, A Chronicle from the Press of Wynkyn de Worde

I think it’s fairly safe to say that every library has a stash of uncatalogued books that have been relegated to an out of the way corner for being troublesome. Often, these books are missing their title pages, or are fragments that have been cut from some larger volume, or else they’re in a language that none of the staff can read. They sit, waiting for the day when there’s enough time, funding, or expertise to accurately identify and describe them.

Cardiff University is no exception, particularly as we’d been without a full-time rare books cataloguer since the middle of 2014. So when I started as the new rare books cataloguer in November of last year, I was not at all surprised to see a trolley parked at the very back of the rare book stacks bearing an assortment of books (and pieces of books) that had been pulled aside from the main sequence, some bearing little slips of scrap paper with handwritten notes as testament to the efforts of cataloguers past.

Although time-consuming, working on these volumes is something of a treat for me. There’s a tremendous sense of satisfaction in being able to match up a small stack of loose gatherings with their parent volume, or to positively identify a particular edition even though its title page and preliminaries have gone on a walkabout somewhere. 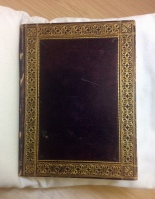 With its binding of rich purple goatskin and gold tooling, this book’s former owner obviously valued it highly.

On this particular trolley, however, I saw a volume that didn’t look like the usual victim of damage or neglect. It was in outwardly good condition, with a 19th century binding of rich purple goatskin, tooled in gold. Why had this volume been set aside?

Opening the volume, I saw that the text was in English and the subject matter was secular–a chronicle of the history of England and Wales–but the typeface was blackletter, hinting that it might be an early imprint. The title page bore no date or publisher’s name, so I turned to the back of the volume in search of a colophon and found this full-page woodcut printer’s device: 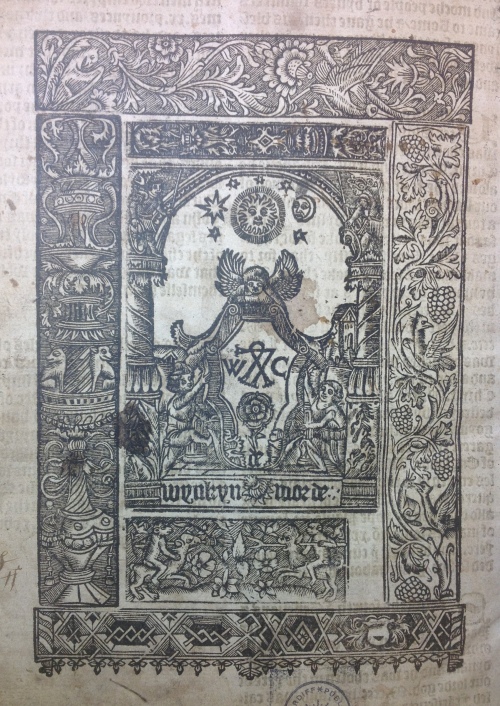 Wynkyn de Worde’s printer’s device. The central glyph is taken from the printer’s mark of his former master, WIlliam Caxton.

I immediately recognized the device as that of Wynkyn de Worde, confirmed by the colophon on the previous page, which reads: “…imprynted at London … in flete street, at the sygne of the Sonne, by me Wynkyn de Worde”. No wonder the previous owner wanted to give it such a fancy binding! 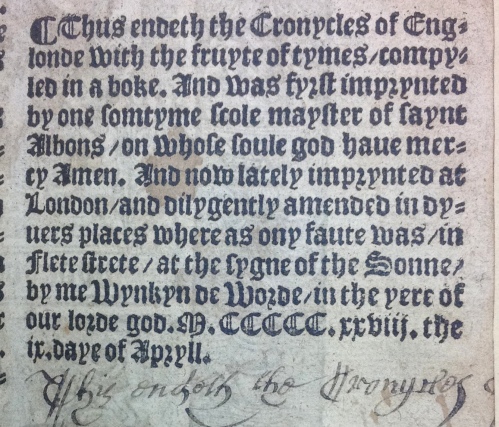 Wynkyn de Worde was the first printer to set up shop in Fleet Street, which remains to this day a central hub of printing and book production.

Born in the Netherlands, Wynkyn de Worde came to England around 1476 to work for William Caxton, the first printer to set up shop in England. Following Caxton’s death in 1492, de Worde took over Caxton’s business, moving his place of business from Westminster to London and publishing more than 400 books in over 800 editions over the course of his career. 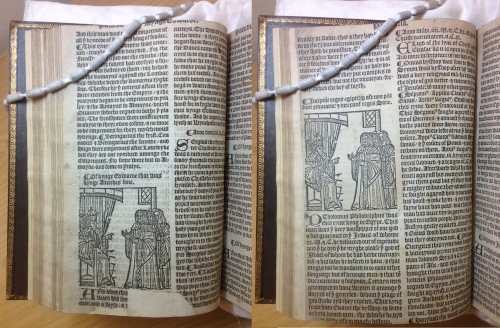 De Worde is sometimes compared unfavorably with Caxton, who translated and published the most fashionable texts from the Burgundian court and sold them to wealthy patrons. De Worde, by contrast, sold religious, popular, and educational books to a broader, more populist audience. The evidence of de Worde’s will, however, suggests that he was respected within the community and a well-connected and successful entrepreneur. His estate, for example, was valued at £201 11s. 1d. His household consisted of eight servants, and he left bequests to nine people associated with the book trade, some of whom owed him debts which were written off.

Cardiff University’s copy includes a some contemporary marginalia, but when the text was trimmed during re-binding much of the handwritten text was lost.

The volume I had found was the 1528 edition of The Cronycles of Englonde : with the dedes of popes and emperours, and also the descripcyon of Englonde. As the title suggests, the text is made up of two main parts. The first part of the text is known as “Brut’s Chronicle” or the “St. Alban’s Chronicle,” and was one of the most popular accounts of English history in the Middle Ages and in the early modern period. Caxton added citations to authoritative texts and produced the first printed edition of it in 1480, making it the first English historical work to be printed and earning it the additional moniker of “Caxton’s Chronicle.” The second part of the text is a description of Great Britain derived from Ranulf Higden’s Polychronicon as translated by John Trevisa.

I soon discovered the reason why this book had been set aside. It was missing several leaves, including the title page and first several leaves of the Chronicle. Presumably to draw attention away from the missing portions, the Descripcyon of Englonde, which has its own separate title page, was bound at the beginning of the volume instead of at the end. A cataloguer looking at this book for the first time wouldn’t necessarily know to search for a record under the main title, “Cronycles of Englonde” instead of “Descripcyon of Englonde”. 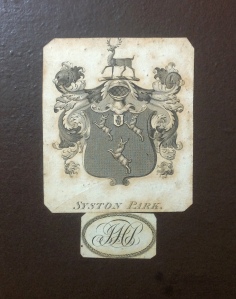 The library at Syston Park held a rich collection of early printed books, including a Gutenberg Bible, many incunables, and numerous editions by the Leiden publishing house Elzevier.

Our copy bears an armorial bookplate with the name “Syston Park”. Syston Park Hall, built in the 1770s, was the family seat of the Thorold baronets. Sir John Thorold, ninth baronet (1734–1815), and his eldest son and tenth baronet, Sir John Hayford Thorold (1773–1831), were both avid book collectors. A second, smaller bookplate bearing the monogram “JHT” suggests that this volume may have been acquired by the tenth baronet. Between 1822 and 1824, Sir John Hayford Thorold commissioned architect Lewis Vulliamy to build a new library at Syston, which visitor T. F. Dibdin described as “perhaps one of the most splendid and taking book repositories in Europe.” In 1884 and 1923, however, the contents of the house were dispersed in sales and the house demolished soon afterwards. This copy of The Cronycles of Englonde was sold as lot 646 in the 1884 auction, after which it passed through the hands of at least two other individuals, Yorkshire historian T. D. Whitaker and J. S. Isaac, both of whom left inscriptions on the endpapers, before it entered the collection of the Cardiff Public Libraries sometime after 1919. 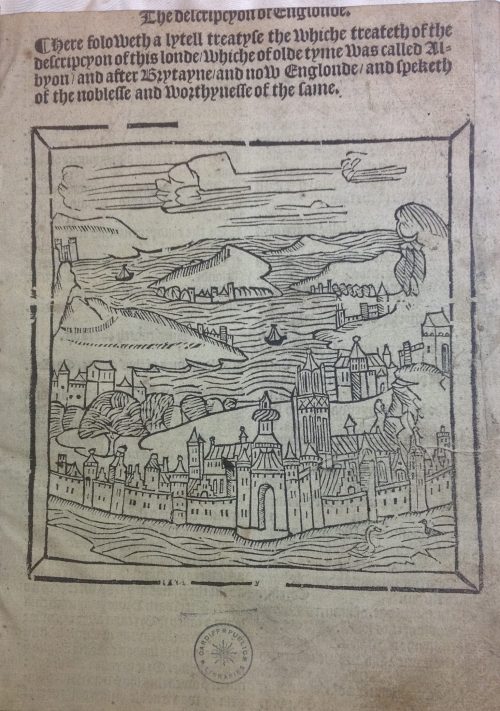 Despite its imperfections, we here in Special Collections are quite pleased to be the custodians of this little volume.  It is the earliest English imprint on the catalogue (so far!), and an important piece of printing history. It will no doubt see a lot of use in the classroom and reading room in years to come, and makes for a very nice start to the new year!

Mapping the heavens and earth: Apian’s Cosmographia in the Cardiff Rare Books Collection

Petrus Apianus (1495-1552), also known as Peter Apian, was Professor of Mathematics at the University of Ingolstadt in Germany and a pioneer in astronomical and mathematical instrumentation. Apian is best known for his studies in the science of cosmography and we hold several editions of his works here in the Cardiff Rare Books Collection. 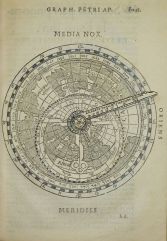 Cosmography was a broad science which aimed to provide a mathematical basis for mapping the position of everything in the universe, and Apian’s work required not only his skill in mathematics but also expertise in geography, navigation, astronomy, and cartography. He published manuals for astronomical instruments, printed scientific works on his own press, and crafted volvelles, or “Apian wheels”, for the calculation of time and distance. 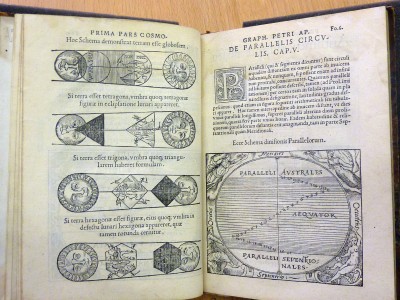 In 1524 Apian produced his first major work, Cosmographia, which provided readers with a guide to cosmography and an introduction to the disciplines of astronomy, geography, cartography, navigation and instrument making. Gemma Frisius (1508–1555), a Dutch mathematician and student of Apian, produced several expanded editions of the Cosmographia, including the 1545 and 1584 editions we have in SCOLAR. The book remained popular throughout the 16th century, being reprinted more than 30 times and in 14 languages. 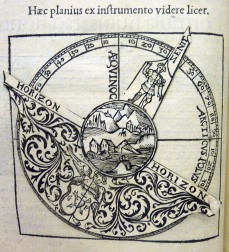 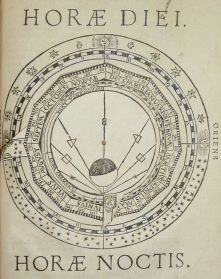 Cosmographia describes various scientific instruments, but there are also several working paper examples of Apian’s volvelles included in the text, with which readers could find the positions of the sun, moon and planets, or calculate latitude using the sun’s height above the horizon. Interestingly, the moving parts in Cardiff’s copies of Cosmographia have been printed on the back of used paper – perhaps an early example of recycling to keep costs down. Considering the practical nature of the volvelles, it is also remarkable that these delicate instruments have survived in such good condition.

A well-used book: marginalia and manuscript notes in an early 16th century herbal

This early herbal forms part of our Continental collection and was published in Paris around  1520. Our copy of Herbarum varias qui vis cognoscere vires (‘Various types of herbs that you want to know the powers of’) has been extremely useful to its previous owners and virtually every page is covered with detailed manuscript notes, observations, lists of ingredients, recipes and other marginalia. 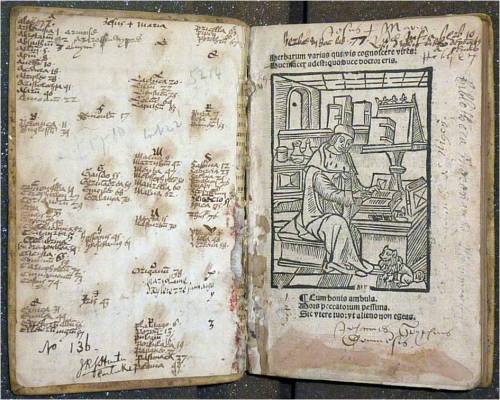 Herbals, from the medieval Latin liber herbalis (‘book of herbs’), contain the names and descriptions of plants with details of their medicinal or culinary properties, often with illustrations to assist with proper identification. These books were among the first literature to be produced in both the East and the West and continued to flourish long after the invention of moveable type in the mid 15th century. We have several other early printed herbals in the Cardiff Rare Books Collection but none have been quite as well used as this one! 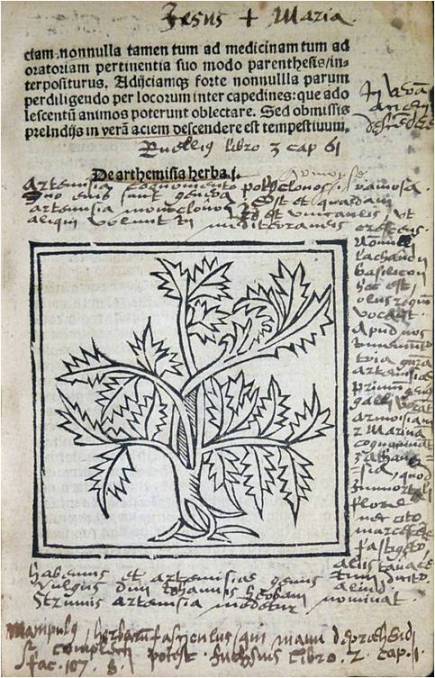 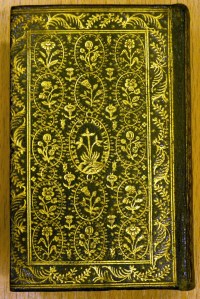 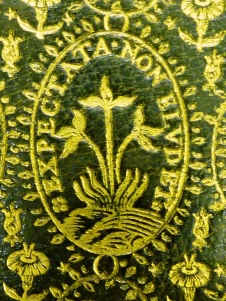 A little research identified these volumes as once belonging to the library of the Venetian diplomat, Pietro Duodo (1554-1611), the binding’s provenance being established by the distinctive stamps used: the upper cover contains the armorial crest of the Duodo family; the lower displays Pietro Duodo’s personal motto, “Expectata non eludet” (“She whom I await with longing will not elude me”). 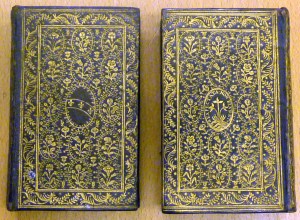 From 1594 to 1597, Duodo served as ambassador to King Henry IV in Paris, and took advantage of his residency to accumulate a gentleman’s travelling library of 90 works in 133 volumes. He commissioned a Parisian workshop to produce richly decorated, personalised bindings that were colour-coded by subject: literary works were finished in olive-brown morocco; theology, philosophy and history in red; and medical titles bound in citron. 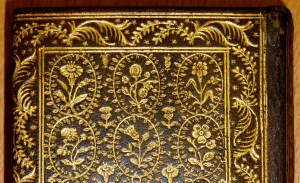 The ambassador never had the opportunity to enjoy his library – he was unexpectedly recalled to Venice in 1597 and was unable to collect the books. They remained in Paris, packed away and untouched for two centuries, until rediscovered during the French Revolution. The volumes were mistakenly attributed to the library of Marguerite de Valois, possibly due to the ornamental daisies on the covers, and were immediately highly prized by collectors. Pietro Duodo was not identified as the true owner until 1925, long after his library had been dispersed.