Daniel Defoe was an extremely prolific author, producing more than 500 books, pamphlets, and journals during his lifetime. Perhaps the best-known of his works is Robinson Crusoe, whose title character is shipwrecked on a remote tropical island for thirty years, and must feed, shelter, clothe, and defend himself.  The first edition appeared in 1719, and ran to more than 360 pages.

Imagine my surprise, then, when I opened this slim little volume—just 36 pages—and saw the rather impressive title: The surprising life, voyages and adventures of Robinson Crusoe, a seaman of York: who, after suffering many hardships by Sea and land, was shipwrecked on the coast of America, and cast ashore on an uninhabited island, where he lived twenty-eight years, without any one to assist him, or converse with, but an American savage, whose life he saved. With his wonderful discovery and deliverance, by an English captain.

A chapbook edition of Robinson Crusoe, published by Dean & Munday sometime between 1808 and 1816.

Intrigued by this rather aggressive abridgment, I soon learned that Robinson Crusoe has a long history of truncation. The earliest abridgments appeared the very same year as the first edition, shortening the text by more than 100 pages. During the remainder of the 18th century, the original text of Robinson Crusoe was republished in an impressive 57 editions, but the number of abridged editions outnumbered Defoe’s original text more than three-to-one. Not only did the shorter versions sell for a fraction of the price of the original, many contemporary readers actually viewed these abridgments as an improvement, retaining all of the best bits while trimming away excess verbiage. In “Eighteenth-Century Abridgements of Robinson Crusoe”, Jordan Howell argues that Robinson Crusoe achieved its place in the literary canon as much due to the popularity of the story as told through abridgments, as to Defoe’s literary style.

Most of these abridgments, however, retained much of the action and character of the original, sitting comfortably at 200+ pages. The little copy I had found belonged to a different genre entirely: the chapbook. 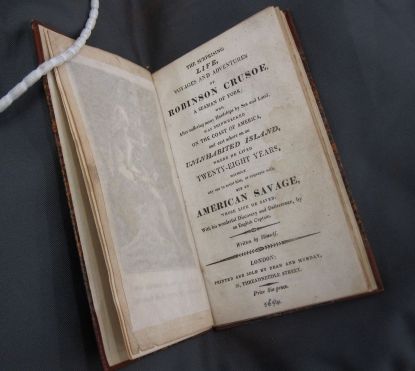 At 68 words, the title is longer than some of the pivotal scenes in this 36-page abridgment.

Intended for sale by itinerant merchants among the poorer (but increasingly literate) classes, chapbooks are generally printed on a single sheet of paper, folded to 24 pages (although they sometimes reached as high as 36 pages) and illustrated with woodcuts. Chapbooks covered a staggering array of subjects, including folk tales, nursery rhymes, almanacs, histories, and religious instruction. Contemporary novels were not often squeezed into chapbook format, but works by Defoe, Bunyan, and Swift were noteworthy exceptions. According to Andrew O’Malley’s “Poaching on Crusoe’s Island: Popular Reading and Chapbook Editions of Robinson Crusoe“, during the 18th century, the novel went through no less than 151 chapbook editions. 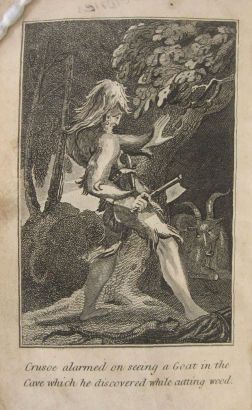 The frontispiece, the book’s only illustration, depicts a scene which is barely mentioned in the text.

Different chapbook editions emphasized different aspects of the story, moulding them to conform to the generic conventions that were familiar to working-class readers. O’Malley writes that, “By rejecting certain key elements of Defoe’s work while amplifying others to the point of distortion, these chapbooks shed light on how the laboring classes interacted with the dominant cultural and ideological formations of the period.” For example, some versions linger over Crusoe’s capture by mutineers and enslavement by Moors, in keeping with lower-class readers’ expectations for a seafaring tale. Others might skip over the details of Crusoe’s means of survival on the island or his religious awakening. These omissions cast Crusoe in the role of a traditional folk hero like Jack the Giant Killer, whose good fortune is the product of luck rather than hard work and spiritual devotion—a narrative which might resonate with a working-class audience with few opportunities for social or economic advancement.

Our chapbook edition is a relative latecomer to the scene. The title page is undated, but it was most likely published between 1808 and 1816 (based on the years that the publishers, Dean & Munday, based their business at the address given on the title page). The paper is cheap, flecked all over with dark brown fibres, and the type has been very unevenly inked, evidence of its downmarket price point. The narrative does not linger over any one episode, but describes all the most noteworthy events with equal (and impressive) economy. Gone, however, are any meditations of a spiritual nature. At 36 pages, it is voluminous for a chapbook, but unlike most 18th century chapbooks, it contains only one illustration. If you fancy a more substantial read, however, we also hold three 19th century editions of Robinson Crusoe in Welsh (84, 90, and 118 pages), one in French (3 volumes) published 1720, and an illustrated edition in English(363 pages), published in 1847.

One response to “Robinson Crusoe in 36 Pages”