This guest post comes from Fiona McLellan, who spent two months volunteering with us this Spring. Fluent in German, Fiona catalogued the German-language correspondence contained in the archive of Benjamin Morse. Over 120 letters are now accessible to researchers for the first time, with the online catalogue providing highly detailed summaries of both content and context. 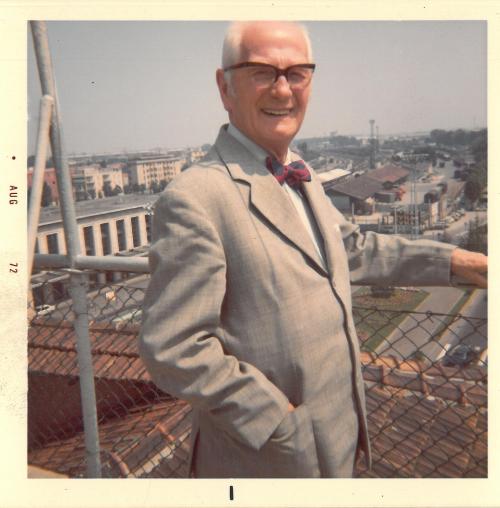 “Held at SCOLAR is the archive of Benjamin Morse (1899-1977). Professor Morse was the lecturer in education, then Italian at University College, Cardiff, where he was employed from the 1930s through to his retirement in 1966. After his graduation from the University of Aberystwyth in 1923, he spent a number of years in Europe, living in both Osnabrück and Trieste. Some of the connections he made while on his travels lasted for decades, and this is attested by his great hoard of letters written in Welsh, English, German and Italian.

Having contacted Alison Harvey concerning volunteering opportunities, I was pleased to be offered the chance to catalogue the letters Morse received in German. This I have now done, with the result that their authors, dates and summaries can be accessed online via ArchiveSearch, alongside Alessandra Toschi’s earlier work on Morse’s Italian papers.

Although among some 126 catalogued items, only one was written by Morse himself, a partial view of his life and character can be made out from the remarks of his friends and professional contacts in their letters to him. ‘Very Honoured Morse’, or ‘Herr Prof. Dr. Morse’, or ‘Jeeb’ was an exemplary networker. In his lifetime, networking was a word for communications engineers; it had yet to have its social meaning consecrated by LinkedIn; but with his numerous dispatches from his summer holidays, on top of his seasonal messages during the  Christmas and Easter vacations, Morse may have single-handedly kept the Italian postcard industry in the black.

However, Morse did not confine himself to postcards. Several of the letters he received from Germany in the late 1940s are partly taken up with thanks for the care packages Morse had sent to the family of Rilke and to fellow academics. To my mind, it is a sure indication of the difficult conditions of life in post-war Germany that  Morse’s gift of three packs of Ovaltine to Professor Mertner of the University of Münster could be met with such apparently sincere gratitude.

It was Rainier Maria Rilke, the poet of mysticism and of feeling, of roses, Apollo and art who occupied the greater part of Morse’s literary attention. The subject of Rilke dominates the German correspondence: scholarly books begin to criss-cross the North Sea within a couple of years of the end of the war, translations are disputed, new publications recommended or traduced. Rilke knew Trieste, having spent a year not far from there in the castle of an aristocratic patroness of his.  I do not know if this was Morse’s reason for choosing Trieste as a destination when, some ten or more years later in the 1920s, he left Britain. Certainly, his interest in Rilke was enduring. In the 1950s, Morse seemed to have viewed the fin de siècle poet as a potential refuge and a comfort: the one letter in the German correspondence to come from Morse’s own hand is addressed to Ilse Blumenthal-Weiss, a concentration camp survivor. His letter quotes in full one of Rilke’s lesser-known poems ‘Heute will ich dir zu Liebe Rosen fühlen.‘ (‘Today, for your sake, I wish to feel roses.’)

But Morse’s papers touch on many subjects, and have allowed me a glimpse into the day-to-day preoccupations of Morse’s far-flung circle: a student from Osnabrück wonders if he has a future as a published German translator of T. S. Eliot; a plagiarism scandal is hushed up at Münster; a retired book seller complains that his children don’t love him any more since he doesn’t have any money. Not only the words, but also the material and physical details of the letters were informative. Those sent in the 1940s were written on sub-toilet-tissue quality paper almost as transparent as a window.

Of additional interest were the social histories contained in the Freistempel or postmarks: the example given here cautions pen-and-paper enthusiasts that ‘the telephone saves time and money’.

My time spent working with Morse’s papers was highly enjoyable and profitable to me. I’d like to thank the staff at SCOLAR for their friendliness, and Alison in particular for managing the project, and for tolerating with such good grace the regular presence of a squatter in her office.”