This guest post is courtesy of Katy Stone, an undergaduate with the School of Modern Languages who is currently working through the fascinating Barbier family archive as part of a CUROP project to catalogue this unique resource.

Following a year of study abroad at l’Université Savoie Mont Blanc, France, I was delighted to be given the opportunity to participate in an 8-week placement with the Cardiff University Research Opportunities Programme (CUROP). My responsibility during the eight weeks is to pursue the efforts made by Pip Bartlett, last year’s CUROP student, in scoping the Barbier archive under the supervision of Professor Hanna Diamond, a 20th century French historian, and Alan Hughes, Head of Special Collections and Archives at Cardiff University. So far this has involved organising, archiving and describing materials from the archive, using my language skills to translate and interpret the sources. I have been cataloguing the information into a spreadsheet for future researchers. Thus far, I have completed boxes 1898, 1903 and 1904, which have revealed fascinating details about this period.

Soon after commencing my placement, I participated in the official launch of the archive and unveiling of a special commemorative plaque in honour of Jacques Vaillant de Guélis, a Barbier family member, on Wednesday 6th June, the 74th anniversary of the D-Day landings. I thought it would be fitting to offer an account of the event for my first blog post.

The afternoon of celebration took place at the Temple of Peace in Cathays Park. The Special Collections team had put together a small exhibition about the history of the Barbier family, Jacques Vaillant de Guélis and the archive. The display showcased some treasures of the rich and extensive archive, including a framed letter from Prime Minister David Lloyd George discussing Belgian refugees in Cardiff.

Guests included members of the Franco-Welsh Barbier family, some of whom had come specially from France to attend the events. It was clear to me that for many of them, some of whom had not met for many years, the event was an opportunity for a family reunion. Owing to the family’s bicultural identity, in some cases, I witnessed first-time meetings between those based in France and relatives who hailed from Paris and elsewhere in France, with others coming from UK destinations such as Devon and Marlborough, Wiltshire.

I found the introductory presentations by Hanna Diamond and Alan Hughes extremely illuminating. They highlighted the extraordinary range of materials in the archive including an abundance of diaries, letters, newspaper cuttings and photographs. I was particularly struck by the significant extent to which the 19th century Frenchman influenced Cardiff’s society through his involvement with local cultural societies like ‘La Société Franco-Britannique de Cardiff’, and his personal commitment to preserving the Welsh language. As a consequence, it is clear that the archive boasts an important array of sources on social history. I would be curious to mobilise the archive to discover more about what life was like for people in Victorian Cardiff during the late 19th century and early 20th century.

Mrs. Delphine Isaaman, granddaughter of Paul Barbier who donated the archive to the University along with her cousin Paul Barbier, also spoke about how her interest in her family’s story grew after finding family documents. This led to her spending around a decade researching in order to fill in the gaps, and resulted in the development of the archive. Delphine had actually stored and catalogued much of the archive before it arrived in Cardiff University Special Collections. In her talk, she shared tales from the archive, such as tips from other family members on bringing up babies, much to the amusement of the audience. This particular story demonstrated Hanna Diamond’s earlier statement that “the archive holds vast research potential for people working on the role of women in World War One”.

To celebrate the life of Paul Barbier’s nephew, Jacques Vaillant de Guélis, the talks were followed by a swift relocation to his birthplace at 3 Museum Place, at the heart of the University campus. During the Second World War, de Guélis played a crucial role as a spy in the secretive Special Operations Executive due to his Franco-British background. A Blue Plaque to honour his remarkable achievements was unveiled by Professor Colin Riordan, President and Vice-Chancellor of Cardiff University, together with Claudine Ripert Landler, the Cultural Counsellor of the French Embassy in the United Kingdom. As a historian and a linguist, it was thrilling to see the war hero’s efforts formally recognised, and the pure elation upon the faces of those who came to witness it. Thanks to the former spy’s bilingualism, he was able to go unnoticed behind enemy lines, fighting with the French Resistance on the ground and contributing to the liberation of Nazi-occupied France. For me the event therefore highlighted the value and importance of learning foreign languages. One monolingual member of the Barbier family who I talked to teased that he was envious of his sibling’s bilingualism. I am optimistic that the plaque will promote Jacque’s story, and I hope that it might inspire others to engage in learning a language. 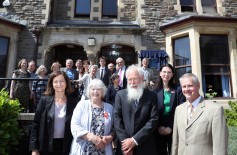 After the emotions of the plaque unveiling, the afternoon closed with a drinks reception in the foyer of the School of Modern Languages, at 66 Park Place. This was a final chance to exchange with the family and other interested parties. It was a valuable opportunity to get to know the family, and I even managed to practise my French with some relatives from Paris! I very much look forward to conducting oral interviews with Hanna Diamond to capture the life stories of Paul and Mary Barbier in July. Flowers were also laid on Jacques grave in Cathays Cemetery by his cousin and the Friends of Cathays Cemetery, a touching tribute to the brave man and a moving end to such a special day.

Overall, it was a humbling experience, and a pleasure to finally put some faces to names. I look forward to immersing myself in the project, with the ambition to help unlock the incredible story of this French Cardiff family and especially their role in Cardiff during the Victorian era.

Robert Recorde and his linguistic Witte

As someone who loves nothing more than rummaging through antiquarian books, mathematics is not usually my first go to subject. And so, in my new role as the Assistant Librarian here at Special Collections and Archives, I was tasked, amongst other things, with identifying some ‘treasures’ in the famous Salisbury collection. Brilliant. Over the past few weeks I have been indulging myself in this magnificent collection of almanacs, medical works, bibles, and musical scores to name but a few, with not a  single thought to Pythagoras, permutation, or anything perpendicular! The only algebra running through my mind is the three bs  – old books + more old books = bliss! And it was in this state of bliss I came across the following:

Title page of the Whetstone of Witte (London, 1557)

The whetstone of witte : whiche is the seconde parte of arithmetike ; containyng thextraction of rootes ; the cossike practise, with the rule of equation ; and the woorkes of surde nombers, published in 1557. Oh, my, God!

Why all the excitement? Well, while I freely admit I know nothing of ‘cossike practise’, I do know that this is no ordinary maths book. Its author, Robert Recorde, is best known as the Welsh Tudor mathematician who invented the equals sign, first introduced in English, in this very book. Fantastic, yes, but, there is much more to the man than just maths. 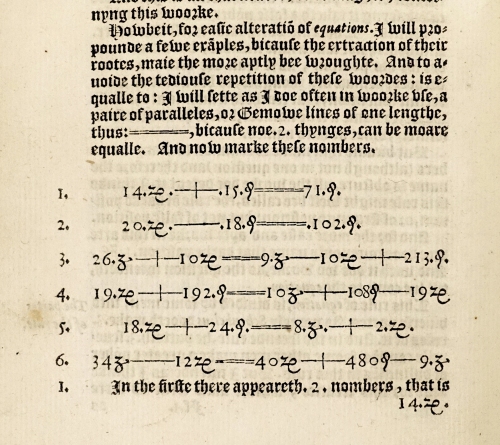 Recorde’s introduction of the equals sign, from the Whetstone of Witte (London, 1557)

Born c. 1510 to a merchant family in Tenby, we know very little of Recorde’s formative years in Wales but should not discount, perhaps, the influences that this thriving mercantile port had on his young mathematical mind. We do know that he obtained his degree from Oxford in 1531, was elected a Fellow of All Souls college and granted a license to study medicine. After gaining his MD from Cambridge in 1545, it appears he moved to London where he reportedly served as Royal Physician to King Edward VI and Queen Mary.

It was not unusual for sixteenth-century physicians to have multifaceted careers as mathematicians, civil servants, diplomats, even spies (the renowned John Dee may well spring to mind here, and it is no coincidence that Dee edited some of Recorde’s works!) Recorde’s scientific and mathematical skills enabled him to work as an iron-founder, accountant and metallurgist for the Crown service. He also wrote on astronomy. The Castle of Knowledge published in 1556, was one of the first to make public reference to the heliocentric model which placed the sun at the centre of the solar system. As if he didn’t have enough to do, he also dabbled in antiquarianism and linguistics! 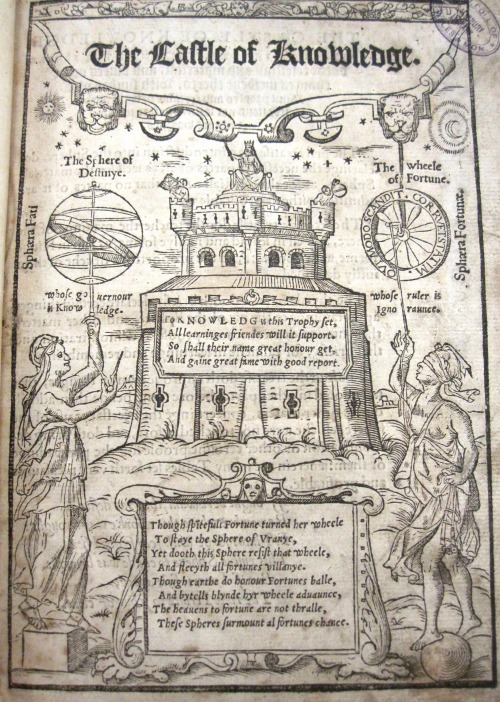 Title page of The Castle of Knowledge (London, 1556)

Such a comprehensive skill-set was not un-common amongst our learned contemporaries, but what makes Recorde unique is the linguistic insight displayed in his writings. The Ground of Artes  published in 1543, possibly the first original arithmetic book in English, was written in the form of a dialogue as ‘the easiest way of instruction, when the scholar may ask every doubt orderly, and the master may answer.’

Opening page from The Ground of Artes (London, 1632)

Similarly, The Whetstone of Witte follows the conversation between a master and scholar comparing the rudiments of geometry and arithmetic. If this didn’t grab you, Recorde also created imaginative titles and often used poetry as a way of introducing his subject and injecting a little humour into his works. The Whetstone of Witte, for instance, so called after a whetstone to sharpen the mind:

‘Here if you lift your wittes to whette,
Much sharpness thereby shall you get’.

Poem at the end of the contents page of The Castle of Knowledge (London, 1556)

His use of English as opposed to Latin, and his attempts to modify the language to explain the maths, highlights his aim to communicate his ideas as widely and effectively as possible. At a time when printing in the vernacular was relatively new and literacy was limited, Recorde’s approach was ground breaking.

His only medical work, The Urinal of Physick, is notable for its use of the vernacular as well as the choice of topic. At a time when fortune-telling and prophesying were highly suspect, uroscopy, or the study of urine for symptoms of disease could be seen as divinatory if it was the only medical method used. So to publish a treatise solely on urine, in English, was an original move especially as this type of literature was not typically produced by orthodox physicians. 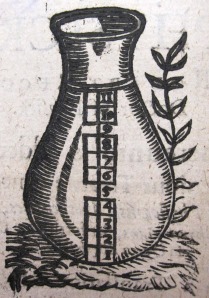 Urine flask detail from The Urinal of Physick (London, 1651)

Nor was this style of writing. It is a testament to Recorde’s innovative attitude to learning that he wrote his works the way he did. By introducing us to a general vocabulary of learning he enabled us to engage with ideas in a language that he helped mould as our own. And so, the lesson of this story is to never underestimate the allure of special collections, for old books, even those on maths = bliss, and as Recorde himself states: ‘no two things can be more equal’.