Working with Special Collections means I’m never short of inspiration. Frankly, it’s hard to move for the stuff. However, recent encouragement has stemmed from much further afield…

… all the way from Offa’s Dyke to be precise. Having read about Robert McBride’s  project of recording and authenticating the ancient trees along this early earthen boundary, I was struck by two thoughts. Firstly, what an ‘ah-mazing’ job – second only to rummaging through old books (though I should point out that McBride’s efforts are voluntary); secondly, how crucial this work is, today especially.

The history of trees is often overlooked yet they are essential elements of our historical and cultural landscapes. Forests and woodlands were initially seen as forbidding and wild terrain, a symbol of the uncivilized. It is no coincidence that the word ‘savage’ derives from the Latin silva, meaning forest or wood. Since prehistoric times, human advancement hinged on the clearing and consumption of these woods, a recurring process throughout the Roman and Saxon eras, where woodlands were felled to make way for human settlements and pastureland. By the end of the 17th century, with the growing need for industrial fuel and building materials, only around 8% of England and Wales remained covered by forest. Some saw this a sign of progress. For contemporaries a ‘wilderness’ did not refer to a stark wasteland, but rather a dark, untamed wood. See, for example, how definitions of ‘forest’ and ‘wood’ in Edward Phillips’ The New World of Words (London, 1671),  are understood as something ‘wild’ and ungodly!

Edward Phillips, The New World of Words: or, a General English Dictionary,  (London, 3rd edition, 1671). First published in London in 1658, this was the first folio English dictionary and featured many unusual, foreign and specialist words.

Phillips’ definition of a forest, 1671: ‘…abiding place for Deer, or any sort of beasts, that are wild…’

Explanation of the term wood, 1671: ‘that signifies mad, or furious.’ 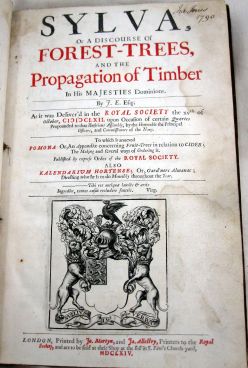 Title page of John Evelyn’s Sylva: or a Discourse of Forest Trees and the Propagation of Timber (London, 1664)

Nevertheless, attitudes were shifting towards a consideration for conservation and planting. Not necessarily a new development in itself, but with the economic demands of building a Royal Navy, and the growth of iron and glass manufacture, organized attempts at planting were becoming more evident. The work of John Evelyn is indicative of this. Sylva, published in London in 1664 is a study of British trees, designed to promote the planting and repair of the country’s forests and saplings for the ‘Glory of His Kingdom’. ‘Him’ being Charles the II who, incidentally, found sanctuary in an English oak during the final battle of the Civil War.

Change was afoot socially too. Whereas wooded territories were primarily cultivated for wild beasts and deer for hunting purposes, these deer parks and Royal forests were increasingly appreciated for their aesthetic and distinctive qualities. The gentry could distinguish themselves physically and socially in a country house set in a landscaped park, whilst fashionable society could parade itself in the open setting of city parks and gardens. The great tree-lined avenue became a familiar aristocratic feature, and trees were increasingly planted purely for their visual charm.

Engraving by John Goddard from Ralph Austen’s A treatise of fruit trees: shewing the manner of grafting, planting, pruning and ordering of them in all respects, (Oxford, 2nd edition, 1657), showing the ‘enclosed’ garden as well as gardening tools and a planting plan.

Hence by the eighteenth-century, any landlord worth his salt planted trees on his land. The following notebook for example, lists the different trees planted on an estate in North Wales, details of trees given to tenants, where they were planted and their history.

Trees given to Tenants (1790-1820), Special Collections and Archives, Salisbury Collection.

Trees also held a sacred and magical significance. The Yew, for example, generally understood to be the longest living tree in Britain, is found in most churchyards. Wales appears to have the world’s largest collection of ancient yews. The most famous is the Llangernyw Yew in the grounds of St Dygain’s Church, Conway, North Wales, believed to be over 4,000 years old! The old Welsh saying ‘gorwedd dan yr Ywen’, ‘sleeping under the Yew’, when referring to one’s demise, suggests that they were seen as a symbol of immortality and sanctuary for the dead. The existence of a holy well or spring near such trees also suggests their sacred origins. Ffynnon Digain (St. Digain’s Well) lies about a mile outside of Llangernyw, whilst in Carmarthenshire the Ffynnon Gwenlais yew grows above the source of the Gwenlais stream, and was noted by both Edward Lhuyd in the late seventeenth century, and Richard Fenton in 1804. The Welsh custom of tying rags to the branches of trees growing near a holy well, whereby the rag is ‘offered’ to the Saint or to God as a healing ritual also reflects their sacred qualities.

Moreover, their magical traits are evident in the medieval Welsh poem Cad Goddeu – the Battle of the Trees. Preserved in the 14th century manuscript Llyfr Taliesin (The Book of Taliesin), the poem refers to Gwydion’s enchantment of the trees of the forest where they rose up as warriors against the forces of Arawn, king of the underworld. ‘Rush, ye chiefs of the wood’, reads one line, while the rest of the poem describes, amongst others, the ‘Alders, at the head of the line’, the Yew at ‘the fore’, and ‘The Ash… exalted most’.  Does this scene Ring any bells? Ring(s) being the operative word! For whilst this particular story inspired Tori Amos’ song, Battle of the Trees, and John Williams’ composition ‘Duel of the Fates’ for Star Wars: Episode 1, I can’t help wondering if Cad Goddeu was also the source of inspiration for the Battle of Isengard in Tolkein’s Lord of the Rings? 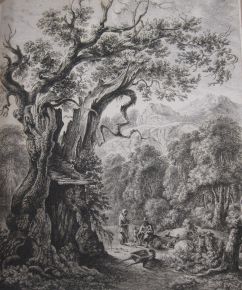 Through all ages then, and worlds, our trees have provided physical emblems of our historic and cultural heritage. Some, like the Pontfadog Oak, where it’s believed the Welsh Prince Owain Gwynedd rallied his army before defeating the English at the Battle of Crogen, or the Cruben yr Ellyll,  The Hollow Demon Oak,  where legend has it the body of Hywel Sele was interred by Owain Glyndwr, have a historic worth, while others have been a source of wonder, like the Crooked Oak of Pembrokeshire which inspired the Welsh poet Waldo Williams to pen ‘Y Dderwen Gam’ – ‘The Crooked Oak’. Some have even survived great battles! And so the moral of this blog post is to never underestimate the importance of our ancient trees. They truly are blooming marvelous – pun intended!