In July we noted that we had added two books to the Human Genetics Historical Library collection that commemorated the centenary of the birth of Darwin.  An additional item has now been added which complements the other two.  As with the others, this copy was originally presented to the University by Miss P. J. Parker.

Published also in 1909 by Cambridge University Press, this is  the Order of the proceedings at the Darwin Celebration, held at Cambridge June 22-June 24, 1909: with a sketch of Darwin’s life.

According to the preface, the Senate contributed £500 towards the celebrations, and another £500 was received from an anonymous benefactor.  The commemoration had a programme of events which included a reception at the Fitzwilliam Museum, a banquet in the New Examination Hall, several garden parties and exhibitions.  The events had specified dress codes, and even at the garden parties Morning dress and Academic robes were de rigeur, whilst members of the senate were instructed to wear “Hoods and Bands and Doctors will wear Scarlet.”

Charles Darwin and his sister Catherine

“The voyage of the Beagle has been by far the most important event in my life, and has determined my whole career.”

The Sketch of Darwin’s life follows along the lines of the Epitome in Darwin and Modern Science, and assistance was given by Francis Darwin in its preparation.  Detailing the milestones of Darwin’s life it includes quotes from his autobiography and his letters, and several photographs and prints.

Cardiff University are currently undergoing a weed and restructure of their Research Reserve.  As part of this weed a number of books on genetics were passed to us to be included in the Human Genetics Historical Library.  Many of these items are old editions of textbooks, useful for the HGHL but not especially interesting in themselves.  So, it was with delight that the following three books were found to be included in the latest batch, helping to populate the evolution and early genetics sections of the library.

On the genesis of species by St. George Mivart (1871) is the oldest book so far to be added to the collection which mainly comprises 20th century texts.  It takes the premise that Darwin’s theory of natural selection is insufficient to explain all the phenomena connected to the origin of species, and attempts to offer an alternative view of ‘natural laws’.  Rebound at some point in its history by University College Cardiff, it contains a large number of black and white illustrations of a variety of species.

The germ-plasm: a theory of heredity by August Weismann (1893) was translated from the German by W. Newton Parker who was a professor at the University College of South Wales and Monmouthshire at the time (an early incarnation of Cardiff University).  This copy was donated to the college library  in 1939 by Dr A. H. Trow from the Botany department.  The work presents a theoretical explanation of heredity.

Evolution & ethics and other essays by Thomas H. Huxley (1901) was originally printed in 1894 as part of the Eversley Series published by Macmillan.  The title piece was a lecture delivered at the University of Oxford, the second of the annual lectures founded by Mr Romanes.  Huxley was renowned as a biologist, an anatomist and for being an advocate of Darwin’s theory of evolution.  This item was presented to the college library in 1943 by a W. Tattersall who had acquired the book as a prize for mathematics at Bootle Technical School.

This month we added two books to the Human Genetics Historical Library that commemorated the centenary of the birth of Charles Darwin and the fiftieth anniversary of the publication of The Origin of Species. Both books were published in 1909 by Cambridge University Press.

The foundations of The Origin of Species, a sketch written in 1842 by Charles Darwin, was edited by Darwin’s son, Francis.  The manuscript was only discovered in 1896 after the death of his mother (Emma Wedgwood), and was found in a cupboard under the stairs at the family home.  It demonstrates that 17 years before the publication of the Origin that Charles Darwin had been able to write a very full outline of his future work.

Darwin and modern science is an edited volume by A. C. Seward that contains essays commissioned to celebrate the Darwin centenary.  The audience was intended to be the ‘educated layman’ rather than experts and it was hoped that it “would serve the double purpose of illustrating the far-reaching influence of Darwin’s work on the progress of knowledge and the present attitude of original investigators and thinkers towards the views embodied in Darwin’s works.”

Some of the contributors to this work include authors we already have represented in the HGH Library, such as William Bateson, a geneticist, whilst others such as Jane Ellen Harrison and James G. Frazer, added essays that showed the influence of Darwin on their own sphere of expertise. 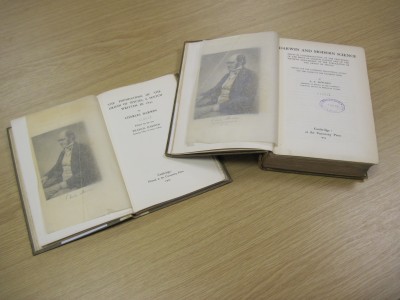