Construction begins on the ark as mankind ignores the danger: this engraving from the 1752 edition of Stackhouse’s “A new history of the Holy Bible” clearly shows the three decks, single window and door described in Genesis

These fascinating illustrations come from A new history of the Holy Bible, written by Thomas Stackhouse and first published in 1733. We hold several editions of this work in the Cardiff Rare Books Collection, each containing different engravings

depicting the design and construction of Noah’s ark as described in the Old Testament. The book of Genesis tells how God decided to undo his creation of the Earth by sending a flood to wash away the wickedness of man. Noah was instructed by God to build an ark, a large waterproof vessel that would save Noah, his family and a sample of the world’s animals from the coming storm that would soon cleanse the Earth.

The rectangular, box-shaped design is apparent here in the first edition of 1733, but the many (impractical?) windows allow us to view the animals on the decks. In his text, even Stackhouse refers to this depiction as “pure imagination”.

In Genesis 6:14-6:16, God gives Noah detailed directions for the construction of the vessel: “Make for yourself an ark of gopher wood; you shall make the ark with rooms, and shall cover it inside and out with pitch. This is how you shall make it: the length of the ark 300 hundred cubits, its breadth 50 cubits, and its height 30 cubits. You shall make a window for the ark, and finish it to a cubit from the top; and set the door of the ark in the side of it; you shall make it with lower, second, and third decks …” The length of a cubit has varied over time but Stackhouse calculated the measurements to correspond roughly to a vessel 450 feet long, 75 feet wide and 45 feet high, which, as Stackhouse readily admits, would make the ark of Noah larger than any wooden vessel ever built.

Although slightly closer to the familiar boat design, this ark also shows the single skylight in the roof as described 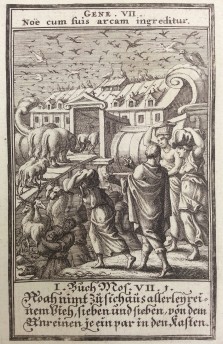 Stackhouse and his illustrators depict the ark as having a rectangular box-like design, very different to the traditional sea-going ship with curved keel, bow and rounded hull (the Hebrew word for the ark, “tebah”, actually means box or container, as in the Ark of the Covenant). In Stackhouse’s words, Noah was commanded to “build a kind of vessel, not in the form of ships now in use, but rather inclining to the fashion of a large chest or ark”. As this ark was “intended only for a kind of float, to swim above the water, the flatness of it’s bottom did render it more capacious”. It was, Stackhouse argues, designed for protection and not for navigation.

Surprisingly, the box-shaped ark has resurfaced once again in 2014. Despite the apparent unseaworthiness of the design, film director Darren Aronofsky chose to depict an ark very similar to Stackhouse’s ‘floating container’ for his retelling of the flood narrative, Noah, starring Russell Crowe as the titular prophet.