On the bilingual wagon.

Well, I don’t know about you but this recent spell of tropical Welsh-weather (three words I’ve never had to string together before) has left me quite parched, and for once I cannot blame the rare books dust. And as is sometimes the case in sunny climes, thoughts may  turn to a cool beer or cider, so whilst I have been sunning my soul amongst the books I’ll confess, boozy thoughts have also been sloshing around my mind, and not just because of the weather…

For I have been sourcing works for a current venture by the Recipes Project, a digital humanities blog arranged by a group of international scholars dedicated to the study of recipes in all their forms – culinary, domestic, medicinal, veterinary and magical. Currently, the project is holding its first Virtual Conversation where, through a series of online events participants can share images, texts, and collections on various social media platforms and join in the conversation about ‘What is a Recipe?’

Of course, we were keen to get involved and I was already aware of recipe related materials in our stacks, such as W. Edmond’s New and easy way of making wines from herbs, fruits and flowers (London, 1767); William Hughes’ The compleat vineyard (London, 1665); William Turner’s (not the artist) Book of wines (1568), interestingly, the first book on wine written in English, and A. Shore’s Practical treatise on brewing (1804).

Extract from William Hughes’, The compleat vineyard: or, A most excellent way of planting vines, (London, 1665).

Now, I wouldn’t want you to get the impression that our collection is a bit of a lush, for  the collections yielded a very interesting range of recipe-related materials which included: Rembert Dodoens, A new herbal, or Historie of plants, (London, 1619); Kenelm Digby’s Choice and experimented receipts in physick and chirurgery: as also cordial and distilled waters and spirits, perfumes and other curiosities, (London, 1688); John Eliot, The medical pocket-book, (London, 1784); and John Howells’ The whole art of farriery laid open: containing cures for every disorder… including several excellent original recipes for horned cattle and sheep, (Cowbridge, c. 1820).

These materials touched upon such a variety of themes, from cooking  to farming and veterinary care; gardening, medicine, chemistry and science, which in turn begged the question for me too – what exactly is a recipe?

A recipe can be defined as a set of instructions for preparing a particular dish or meal, including a list of the ingredients. It can also refer to something that is likely to lead to a particular outcome, so for example, all these books on wine making could be a recipe (no pun intended!) for disaster at our next office Christmas party. A recipe is also a medical prescription. Historically, the term was first used as an instruction, derived from the Latin recipere, meaning to accept or take. This is why you may notice the symbol Rx on any prescriptions, since doctors usually begin theirs with this abbreviation, and why culinary recipes often begin their instructions with ‘take…’, a style first evinced in De re Coquinaria, a collection of 4th or 5th century Roman recipes where each one begins with the Latin command ‘recipe’.

One of the oldest English works on recipes is The Forme of Cury, cury from the Middle French cuire, cook, (just in case you were thinking about a curry too). Written on a vellum scroll around 1390, it is signed by ‘the chief master cooks of King Richard II’. However, it wasn’t until the advent of printing that books on household management and the preparation of food became increasingly popular, no more so than during the 19th century with the Victorian emphasis on domesticity and respectability.

It shouldn’t come as a surprise then, that we have several examples of household instructors and recipe books within our collections, in English and Welsh. 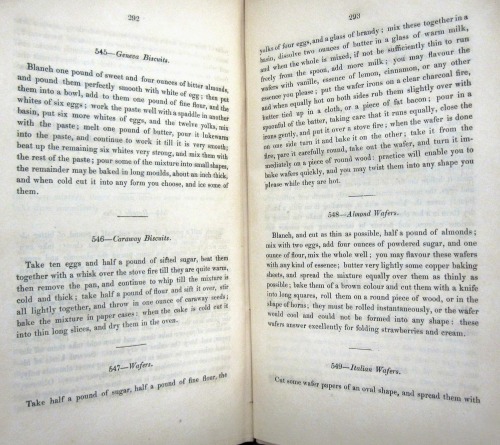 Biscuit recipes from I. Roberts’ The Young Cook’s Guide; with Practical Observations, (London, 1836).

What did strike me as interesting though, was the linguistic element to some of these works. John Pryse’s Welsh Interpreter, for example, is at first glance a basic Welsh dictionary; on second glance a Welsh phrasebook or guidebook of sorts for those travelling to Wales, yet on closer inspection also serves as a recipe book!

Sandwiched between the ‘useful phrases’ and ‘familiar parables’ is a selection of ‘Useful Receipts – Cyfarwyddiadau Buddiol’, with wines at the top of the list no less, as well as ‘Instructions to make bread’.  What’s going on? Is travel writing the new ingredient in recipe literature? What’s even more intriguing is that this section was ‘extracted’ from what Pryse calls a ‘useful Duoglott Receipt Book’, which incidentally we also have in our collection.

Written by the Independent minister, Evan Evans Nant-y-Glo, the book is actually called A Duoglott Guide for Making Temperance Drinks, Barm &c &c, so not quite as intoxicating as some of our earlier recipe books, but there’s enough there to sozzle our interest nonetheless. Drunkeness was seen as a growing problem during the 19th century, especially in the rapidly expanding industrial areas where factors like industrialisation, Nonconformity and social improvement led to a growing resistance against the consumption of alcohol.

Initially an anti-spirits movement, The British and Foreign Temperance Society was founded in London in 1831, and the first temperance society in Wales was established at Holywell in 1832. Others soon followed, and by 1835, the movement had taken a total abstinence or teetotal stance. With the impetus of Nonconformity and religious revivalism, teetotalism made significant progress in Wales during the 1830s, a fact reflected in our collections. Moreover, Evan’s Guide was published in 1838, bilingually so as to broaden its appeal amongst the increasing numbers of non-Welsh industrial workers and the temperance movement generally.

It includes interesting techniques for making ginger beer, pop, lemonade, raspberry vinegar, artificial and spruce ale, as well as jellies and wines and cordials to name but a few. There is a segment on yeast and bread, plus a more curative inspired section for ‘The Weak and the Sick – I’r Gwan a’r Claf’. Here, recipes are noted for their medicinal and comforting properties, such as Flour Caudle which requires simply ‘one desert spoon of fine flour’ mixed with water, milk and sugar to be boiled over the fire. It is, apparently, a ‘very nourishing and gentle astringent food. Excellent for babies that have weak bowels’. But before you check your flour stock, other recipes include China Orange Juice, a very ‘useful thing to mix with water in fevers’, French milk porridge, ‘much ordered with toast, for breakfast, to weak persons’, and a simple ‘very agreeable drink’.

Not such a dry read after all! Indeed, Evan’s temperance recipes serve to highlight just how intricate the study of recipes can be, spreading across subjects and relative themes like history, science, medicine, religion, travel,  even the study of literacy and linguistics.  The debate about recipes is timely indeed, and to quote the Recipes Project, whether you’re a recipes scholar or enthusiast, or indeed a wine or ginger beer lover, there is a place for you in this conversation. And so the moral of this blog post is: off the literary wagon or on it, there’s a recipe that fits. Iechyd da (cheers) everyone!