I have been fascinated by books as physical objects ever since I was a student in the MLIS programme at UCLA, where I somehow got a job making archival boxes and doing simple book repairs in the Library Conservation Center. It was in the conservation lab that I encountered my first 400-year-old book, and it is largely because of that experience that I decided to specialise in rare books librarianship. For several years, I have wanted to enrol in Professor Nicholas Pickwoad‘s course on European Bookbindings, 1450-1830, which he offers every year through various different programmes including Rare Book School at the University of Virginia and London Rare Books School. Earlier this month, I finally had the opportunity to enrol in his course through Ligatus Summer School, and it was every bit as exciting (and exhausting) as I’d hoped.

The library at Norwich Cathedral.

This year’s summer school was hosted by the Norwich Cathedral Library, and consisted of lectures in the mornings, followed by hands-on sessions looking at examples of different binding structures in the afternoons. Two of the afternoons were spent in the cathedral library itself, and during the rest of the week we visited the libraries of Blickling Estate, Holkham Estate, and Felbrigg Hall. It was a real treat to be able to go behind the scenes of these historic properties and examine portions of their book collections in detail.

The first day of the course included the usual round of introductions: who we are, where we come from, and why we’re on the course. Out of twelve students on the course, I was surprised to learn that I was one of just two librarians; all of the other students were book and paper conservators. While I enjoyed the chance to meet people from different backgrounds, I was somewhat disappointed that my own profession was not better represented. Because rare book stacks are not generally open for browsing, the library catalogue (or sometimes a particularly knowledgeable librarian) is the only avenue for researchers to find items that are relevant to their research. Unless cataloguers are able to describe bindings and other types of material evidence with the same level of accuracy and detail that we devote to bibliography, we are failing to provide researchers with an important means of accessing our collections. As it becomes possible for anyone with an internet connection to view a digitised version of the British Library or Bayerische Staatsbibliothek‘s copy of a particular text or edition, it is the unique characteristics (like bindings) of individual copies of books that will attract researchers into special collections reading rooms.

Damaged books can reveal structural details that would not otherwise be visible.

Until quite recently, most of the literature on the history of bookbinding has focussed almost exclusively on decorative features such as tooling, exotic leathers, and colourful onlays rather than on the underlying structures. In other words, bindings are analysed as works of art rather than archaeological artifacts. Professor Pickwoad, on the other hand, emphasises the importance of identifying and cataloguing binding structures as evidence of when and where a book was bound, by whom, and for what purpose.

We looked at quite a lot of very beautiful books, but in many ways it was the ugly, battered ones that were the most interesting. It was the books whose endpapers were peeling and whose leather covers were torn that allowed us to see what materials the binder had chosen for the sewing supports and spine linings, and where he (or she) had cut corners to save time and money.

The purpose of a binding is to hold a book’s pages together and protect them against wear. During the Middle Ages, books were tremendously expensive luxury items, and binders took great pains to ensure that such a significant investment was well protected. With the advent of the printing press, books were produced in much larger numbers and at a fraction of the cost, and binders found numerous inventive ways to keep up with the demand for large numbers of reasonably-priced books, usually at the expense of structural integrity.

These books look similar from the outside, but each one’s structure is slightly different.

Over the course of the week, we looked at each of the steps in binding a book, from assembling the endleaves, to sewing the bookblock, rounding and backing, sewing the endbands, attaching the boards, trimming the edges, covering the book, and finally finishing. With each step, we looked at how the techniques and materials used varied across regions, time periods, and price points. It was fascinating to see how books that looked almost identical on the surface revealed a multitude of different structures underneath, which could be traced to different times and places.

Prior to the industrial age, it was not uncommon for books to be sold without bindings or in cheap, temporary bindings, and for customers to have them rebound according to their taste and budget. Because bindings were often selected by the purchaser rather than the bookseller, they can tell us whether the reader was wealthy or poor, ostentatious or subdued, local or foreign. Over a book’s lifetime, it may be rebound because the old binding was worn or damaged, or because the owner wanted to dress it up a little. Some wealthy book collectors had their entire libraries rebound and decorated in a uniform style. By looking at a book’s underlying structure as well as its decorations, it is sometimes possible to find elements of earlier bindings which can tell us when and where the book was being read, and by whom. 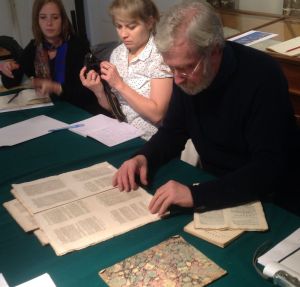 Professor Pickwoad gives his students an enormous amount of information to absorb (for example, the leather preferred by Oxford bookbinders was often especially dark in colour, and they often tooled patterns of cross-hatching on their board edges near the spine; French binders often attached their boards by lacing the sewing slips through three holes instead of two; German binders often put especially sharp creases on the fore-edge extensions of their parchment bindings), but after a week of looking at dozens of examples, it was all beginning to sink in. As a rare materials cataloguer, I have always tried to include at least a brief description of each book’s binding–if nothing else, knowing what a book looks like makes it easier for library staff to find it on the shelf. Now, this course has given me the knowledge and vocabulary to describe not only what a book looks like, but how it was made. More importantly though, it has given me a new appreciation for the importance of bindings as artifacts that can help us to understand the movement of goods, people, and ideas throughout history. My hope is that by including better descriptions of bindings in the library’s catalogue, I can help to open up new avenues of research rooted in the archaeology of the book.

One of my classmates takes advantage of a tea break to record details of some of the books at Holkham Estate.

I was delighted to discover this week that the Cardiff Rare Books Collection includes two books with fore-edge paintings by the artist John T. Beer. Fore-edge paintings are watercolour illustrations applied to the outside edges of a book’s pages; the technique dates back to before the invention of printing, possibly as early as the 10th century.

A painting of George Fox, founder of the Society of Friends, arriving in Wales to a hostile reception appears on Cardiff’s copy of the third edition of Fox’s journals, published in 1765 (Weber-Beer 105).

John T. Beer was a successful Merseyside clothier and an avid book collector, who turned to fore-edge painting after his retirement and produced hundreds of works between 1884 and 1900. As he was not a professional painter working on commission, Beer was able to select books from his own collection, including several incunabula, and decorate them to his own taste. As our examples show, he often took inspiration from the contents of the book.

“John preaching in the Wilderness”: Beer’s illustration on an early 16th century Latin Bible, printed at Lyon by Jacob Mareschal in 1514 (Weber-Beer 15).

In the 1600s, some bookbinders even discovered they could paint just inside the fore-edges of a book then cover the outer edges with gilt to create a hidden illustration that was undetectable when the book was closed and visible only when the pages were fanned. Beer did not gild the fore-edges, but he did fan the pages before adding his illustration. Thus, the closed book shows a slightly squashed version of the scene, with the correct proportions only appearing with the pages are fanned open.

The “open” scene on Fox’s journal. The artist would have fanned the pages and gripped them in a vice before applying the watercolour.

Beer did not sell any of his works in his lifetime and left more than 200 fore-edge paintings and painted bindings when he died. His entire collection was sold by Sotheby’s auction house in November, 1903, when these two volumes were apparently purchased for Cardiff Library. 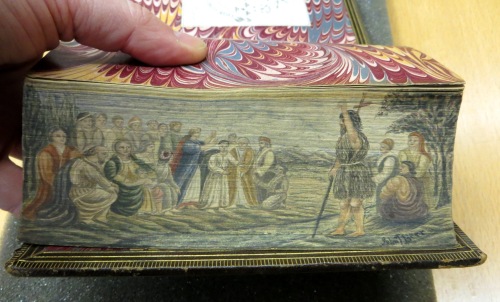 Fanning the pages of the Biblia Sacra to show the more “open” illustration.