For the past month, I have been helping to catalogue the Janet Powney Collection in Cardiff University’s Special Collections and Archives. Having worked extensively with the collection as part of my PhD research, I was very excited to have the opportunity to reacquaint myself with the wonderful Victorian and Edwardian children’s books that it comprises. As I sifted through the familiar colourful volumes with their decorative lettering and pictorial cloth covers, enjoying the pleasant scent unique to old books, I felt like I was reencountering old friends. That was until I came across an intruder, a strange trespasser that seemed out of place in a collection largely made up of religious novels that were given as prize books to the working-class children of nineteenth- and early twentieth-century Britain.

The book stood at just 7” in height. It boasted quarter black cloth covers with marbled paper on its boards and a printed spine label: all characteristics of early publisher’s bindings (1820s-1840s) or temporary bindings. Inside, the text was printed on heavy wove paper with deckle edges, suggesting that the volume was, indeed, a product of the early nineteenth century. However, to my surprise, the front of the book clearly stated “Reset, 111th thousand Nov. 1919” meaning that 111,000 copies had been printed by November 1919. How could this be?

The binding and paper are in a style reminiscent of early 19th century books.

With the appearance of machine-made paper in the nineteenth century, the deckle edge (which is only found on handmade paper) gradually came to be seen as a status symbol. This tradition carried forward into the twentieth century when many presses advertised two versions of the same book: one with smooth trimmed edges and a higher-priced deckle version. Could this desire for prestige explain the unusual pages of the book? Perhaps so. 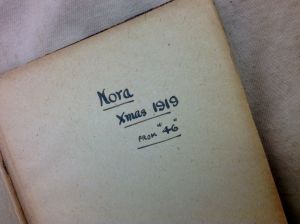 The only clue to the book’s provenance is this cryptic inscription.

But what about the binding itself? Now able to discount the fact that the book was an early publisher’s binding, the question arose that if the book was, indeed, a temporary binding, why did its owner never get it rebound? The longevity of temporary bindings was certainly underestimated, as attested by the survival of so many books with temporary bindings in special collections. Could the high quality of the temporary binding expound why the owner chose to keep it that way? Or perhaps they lacked the money to take the book to a binder and have it bound to match their own personal library. Unfortunately, the cryptic inscription on its front free endpaper – ‘Nora Xmas 1919 from “46”‘ – meant that no supporting information from census records about the socioeconomic status of the giver or recipient could be used to support this theory. 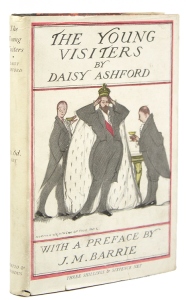 Illustrated dust jacket, from a copy for sale by James Cummins Booksellers.

It was not until I carried out further research on book history and antiquarian booksellers’ websites that I was able to solve this conundrum. These websites revealed that the volume was, in fact, originally issued with a dustjacket bearing a decorative illustration in grey and red. The copy in Special Collections clearly lacks this dustjacket, which offers some suggestion as to why the covers beneath are so uncharacteristically plain in appearance. Priced at 3 shillings and 6 pence (roughly £7.64), the book sat at the lower end of the market. Therefore, it is possible that all its ‘antiquarian’ features served to attract potential buyers who viewed the book in shops by making it look more valuable than it actually was.

Having resolved the mystery of the book’s uncharacteristic appearance, its frontispiece presented me with a new puzzle. It showed a photograph of a little girl with the caption ‘the author’. “The author?” I thought to myself. “How can that be?” Yet, as I dug into the story behind the book, it became apparent that yes indeed, the author was just a little girl: Daisy Ashford wrote The Young Visiters, or Mister Salteena’s Plan when she was just nine years old.

The author was just nine years old when she wrote The Young Visiters.

The Young Visiters is a society novel that parodies upper-class society in late Victorian England. It tells the story of Alfred Salteena, “an elderly man of 42”, who strives to become a gentleman in order to win the love of Ethel Monticue. Despite his best efforts, Ethel ends up marrying Bernard Clark, a real gentleman, thus breaking Alfred’s heart.

A facsimile of the original manuscript.

The novel was written by nine-year-old Ashford in 1890 in a school exercise book. The book lay forgotten in a drawer for many years until 1917 when Ashford rediscovered it and lent it to her friend, Margaret Mackenzie, who was recovering from an illness. Mackenzie passed on the book to Frank Swinnerton who worked as a reader for the publishing house Chatto and Windus. Swinnerton was so enthusiastic about the book’s raw innocence and naiveté that the publishing house immediately agreed to publish it almost exactly as it had been written. After hearing about this child prodigy, J.M. Barrie put himself forward to write the book’s preface.

In early 1919, The Young Visiters was released, complete with its childish spelling mistakes, grammatical errors, single-paragraph chapters and, of course, a preface by the distinguished J.M. Barrie. All of these factors contributed to the book’s massive success. In no time at all, it became a bestseller, reprinted eighteen times in its first year alone. The New York Times described it as “one of the most humorous books in literature.”

The novel was so successful that it was reprinted more than sixteen times and sold more than 111,000 copies in its first year.

In 1920, a stage play of the novel was written by Mrs George Norman and Margaret Mackenzie and first performed in London before transferring to New York shortly after. The play was praised strongly by critics, with Alexander Woolcott of The New York Times stating that “probably no novel was ever so reverently dramatized since the world began.” For some time, the book’s title even became a witty way in which to criticise other works of a naïve style. Edmund Wilson most famously referred to F. Scott Fitzgerald’s This Side of Paradise as “a classic in a class with The Young Visiters” in a bid to make fun of his childish writing style.

Over time, the book faded in popularity. This was largely due to a rumour that circulated, which claimed that it was an elaborate literary hoax and that J.M. Barrie himself was the real author. During the late 1960s, the book was rediscovered and a musical was produced by Michael Ashton and Ian Kellam. It resurfaced again in 1984 when a feature-length film starring Tracey Ullman and John Standing was released. In 2003, a television film version of the book starring Jim Broadbent, Lyndsey Marshal and Hugh Laurie was made by the BBC. However, The Young Visiters still remains widely unknown to even the most avid readers.

Shortly after the publication of The Young Visiters in 1919, a volume including some of Ashford’s other writings was released, the last of which, The Hangman’s Daughter, was written when she was fourteen. Ashford produced no other work in her lifetime. Instead, she led a quiet life in Reepham where she ran the King’s Arm Hotel with her husband James Devlin. Much speculation has taken place regarding why Ashford stopped writing. The most likely answer has been that she simply grew up.

Now largely forgotten, The Young Visiters was a record-breaking novel in its day, selling just as many copies as the better known My Man Jeeves by P.G. Wodehouse and The Moon and Sixpence by W. Somerset Maugham, also released in the same year. Behind those unassuming covers of the little volume held in Special Collections lies a tale of genius and marvel, surprise and wonder, innocence and amusement. It just goes to show: you can never judge a book by its cover.