The Collingwood Collection: an introduction to the family and the project

It’s been two months now since I joined Special Collections and Archives as the project archivist for the Collingwood Collection. During this time I have been completely immersed in the family’s correspondence and, as a result, feel like I know the family almost as well as my own! The project is generously funded by the National Cataloguing Grants scheme provided by The National Archives. My job is to create a catalogue with detailed descriptions of all the correspondence in the collection in order to make it accessible to researchers and to public scrutiny, interaction and celebration. (With this in mind, we will be running some events to showcase the collection over the coming year.)

The Collingwood Family: a potted history

The Collingwood Collection is the family archive of an extraordinary family. The Collingwoods have been described as ‘probably the most intellectually and artistically gifted family in the Lake District in the late 19th and early 20th centuries.’ The collection in Cardiff centres around W. G. Collingwood and his descendants. W. G. Collingwood (1854-1932) was an artist, author, professor of fine arts, Norse scholar, and John Ruskin’s friend and secretary. In 1883 he married Edith Mary (Dorrie) Isaac (1857-1928). Often confined to a footnote along the lines of ‘also an artist’, she was, in fact quite remarkable. While she was alive her art was commercially successful – much more so, it seems, than her husband as she was reportedly the main breadwinner in the marriage and exhibited widely both in the Lake District and in London. She was a noted miniaturist and while this is obvious from her artwork in the collection, it is also evident from the many sketches included in her letters to family and friends, such as these two sketches of her daughter Barbara.

Sketch of Barbara in a letter from Edith Mary (Dorrie) Collingwood to Ruth Collingwood (her sister-in-law), 1890. She reused this paper which she had sketched on years earlier.

Sketch of Barbara dressed up to pay calls in a letter from Edith Mary (Dorrie) Collingwood, 20 July 1889.

They had four children. Their eldest, Dora (1886-1964), was another successful artist and married the notable medical doctor Ernest Altounyan. After the First World War, she moved with her husband to Syria where Ernest’s father ran a pioneering hospital in Aleppo. Ernest worked as a medical doctor in the hospital and they were both heavily involved with helping refugees in Aleppo, particularly in response to the Armenian Genocide (1915-23).  Arthur Ransome, a close friend of the family, based the Walker children in Swallows and Amazons (1930) on Dora and Ernest’s children.

Barbara (1887-1961), the Collingwood’s second child, was a sculptor. Her husband, Oscar Gnosspelius was a civil engineer who specialised in mining and railway construction in South Africa before the war and later prospected on the Coniston Fells with W. G. Collingwood. He was also a pioneering aviation expert and built hydroplanes on Lake Windermere. Their daughter, Janet (1926-2010), was an architect and historian. She was the former owner of the collection before it was deposited at Cardiff University.

Their fourth child, Ursula (1891-1964), was both an artist and a trained mid-wife. She worked as a midwife in London’s East End from around 1912 to 1925 before returning to teach art at Blackwell School and later becoming a farmer.

I’ll be writing further blog posts introducing you to some of these fascinating family members over the next few months.

The beginnings of cataloguing

During the first few weeks, I concentrated on the boxes set aside as being of particular research interest. These included correspondence between members of the family and notable people such as John Ruskin, Arthur Ransome, E. M. Forster, and even a letter from Beatrix Potter, and many more gems besides.

One letter particularly which stood out to me at the time was a letter from E. M. Forster to Barbara Collingwood. Writing in 1916, he describes the effect he believes the First World War was having on him artistically and personally. Much is known of Forster’s pacifism but I have been unable to find an insight as personal the one revealed in this letter. 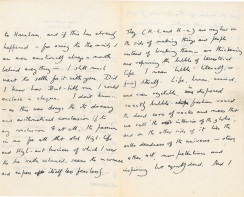 In this letter, Forster writes to his friend:

I don’t know… — as this war drags on to its dreary and arithmetical conclusion if to any conclusion at all, the passion in me for all that old High-life and High-art business of which I used to be rather ashamed, seems to increase and express itself less fearlessly.

Reading and cataloguing the personal correspondence of the Collingwood family is a real privilege and feeling like I am really getting to know them. It is almost like a novel unfolding with stories not yet told. I felt this particularly when I was reading the letters Edith (Dorrie) wrote to her future husband, W. G. Collingwood, when they were courting. It is not often that one gets such a personal insight into the private lives of others, especially not those from 120 years ago. A few letters have been reproduced hear but I look forward to telling the story of their courtship in a later blog post. 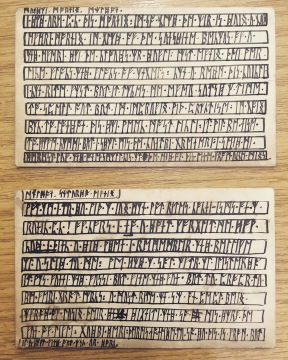 There is estimated to be around 4000 letters in total in the collection. I have now created item level descriptions of around 30% these. It’s been exciting uncovering stories about these fascinating people, and I’m looking forward to sharing some of these with you over the coming months.

One response to “The Collingwood Collection: an introduction to the family and the project”