Dr Mina Moore: marriage and motherhood at Cardiff University in the 1940s

Over the last year or so we’ve been very proud to share stories about the inspiring women who worked and studied at Cardiff University (formerly University College of South Wales and Monmouthshire). The founders of the College in 1883 were adamant that women should be admitted on equal terms to men and educated alongside them – an unusual proposition for the time!  However, despite the pioneering women who worked here, we recently came across the story of Dr Mina Moore and had to re-evaluate our opinion – just a little bit…

Dr Mina Moore worked as a lecturer in the University College of South Wales and Monmouthshire’s Teacher Training Department under Professor of Education, Olive Wheeler.  She came to the University in 1938 with a wealth of experience in teaching and a solid grounding in the theory of teaching.  In 1939 she married an Italian architect, Giuseppe Rinvolucri, and continued in her job without any issues – the College did not insist on women resigning on marriage, unlike many employers at that time.  In June 1940 Mina gave birth to her son and allegedly faced strong disapproval from Olive Wheeler.  In fact, Mina claimed that she was told to give up her job in order to look after the baby, so she immediately consulted a solicitor.  We hold a file of correspondence and reports that followed Mina’s complaint, as well as several follow up reports in Senate minutes.

Letter from Mina Moore to the College following her dismissal 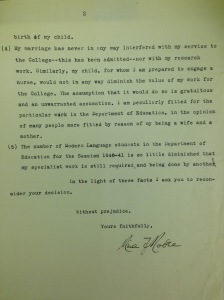 After Mina’s departure and the receipt of her complaint, Senate appointed a committee to look into the events.  The reports show that the situation was more nuanced than it initially appeared.  Senate acknowledged that nothing was said in women’s contracts about giving up work on marriage or when they had a child and therefore Mina had no reason to think either of these events would be a problem.  The report also acknowledged that it was inherently contradictory to allow women to marry and then complain if they had a child.  Interestingly, the committee found that there had been a misunderstanding which led to Mina’s departure.  She had been strongly advised by Olive to consider her position (who invoked the name of the Principal at their meeting) – but she had not formally been given notice.  They said that in making that assumption and consulting a solicitor she had aggravated the situation and led Council to assume she had been dismissed as well.  Council went on to ratify the (actually non-existent) dismissal.

The initial report was fairly critical of Olive, who they claimed had been inconsistent and had wrongly given Mina the impression that she was to be dismissed.  Olive objected to this draft and emphasised the other issues she had with Mina’s continued employment.  As an Italian citizen Mina’s husband was at risk of internment as soon as Italy declared war on the UK and France.  (Ironically, they did this one day after the birth of her son.)  Mina’s own nationality was in question following her marriage because at this time women took their husband’s nationality – although they could apply to have their British citizenship restored*, which Mina seems to have done.  Following the declaration of war by Italy in 1940 she would be restricted as to where she could travel and might have to request police permission or an escort before going into schools – an important part of her job.

There was also unease over the fact that Mina had moved to North Wales to be with her husband after her marriage.  The distance from the College was a worry to Olive even before Mina’s pregnancy was revealed.  Taking all of these factors into account, Olive believed that Mina would not be able to perform her job satisfactorily or devote the necessary amount of time.  She emphasised that Mina’s work was specialised and it would be impossible to find someone who could cover for her.  It was noted in the report that although Mina carried out all her lecturing duties before the birth on 9th June, she did fail to complete some of her admin tasks over the summer.  Although these other reasons did affect her attitude to Mina, Olive clearly stated her belief that from a psychological and developmental perspective, mothers should be at home with their babies.

As part of the investigation, the Committee asked other employers about their policy in this area.  A letter in the file from Liverpool Education Department states that they would only employ married women on a temporary basis and then only if they were separated from their husbands or were the sole breadwinner due to their husband’s ill health.   The Department automatically took an announcement of marriage by a female employee as a resignation.  In contrast to this, after a full investigation Senate formally declared that women should not have to leave the College when they married or had a child.  As long as the women could carry out their job, they would remain employed.  It was suggested that they might need to look at offering a leave of absence around the time of the birth, which could cause problems over covering their duties, but this did not prevent them from upholding the right of women to stay in their job. 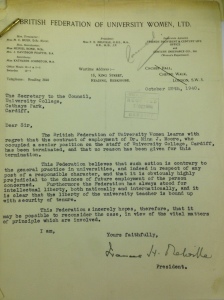 Letter of support from the British Federation of University Women

Although we were initially a little saddened to see one of our heroes disinclined to uphold a female member of staff’s right to work after having a child, we were heartened by the College’s eventual decision. It is only fair to say that although many of us today may have a different opinion to Olive, as a child psychologist her objections were made on the grounds of genuinely held professional concern for the welfare of children, and they were by no means unusual.  Olive’s life and work still stand as inspiring and progressive: Inspirational People 1: Dame Olive Wheeler  This story also raises the interesting question on how we choose to view people who display common attitudes of the times in which they lived.

To finish on a positive note, I’m pleased to report that Mina went on to have a very successful career in academia and died in North Wales at the age of 89.  We admire her determination to marry, have a child and continue to carry out her work to a high standard.  Her refusal to accept the position she found herself in led to the right to remain at work after childbirth becoming the official policy of the College.  While there may still have been hurdles to overcome, it was a step in the right direction.

* “Under the British Nationality and Status of Aliens Act, 1914, a woman loses her nationality, and under that Act, as amended by the 1933 Act, such a woman is given the right to make an application for her British nationality to be restored to her.”

Posted on November 28, 2016 by Alison Harvey Leave a comment

This entry was posted in Institutional Archives. Bookmark the permalink.