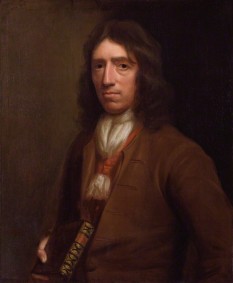 Portrait of William Dampier by Thomas Murray, oil on canvas, circa 1697-1698, courtesy of the National Portrait Gallery.

At age 18, William Dampier (1652–1715) was apprenticed to a seaman at Weymouth. He served briefly in the Third Anglo-Dutch War, worked on a Jamaican sugar plantation and aboard merchant ships, before deserting his post to join a buccaneer fleet. After an unsuccessful attack on Panama City, he joined a group of French and English pirates with whom he raided Costa Rica and frequented the buccaneer base at Tortuga before being driven away by Spanish warships. In 1686, Dampier sailed more than 6000 miles across the Pacific from Cape Corrientes, Mexico, to Guam, later carrying on through the South China Sea and the Gulf of Thailand. From there, his ship turned southward and in 1688 became the first English ship to visit New Holland (Australia). His journey continued through India, Sumatra, Vietnam, and the Malay peninsula, until he finally returned to England in 1691, making him the first Englishman to circle the globe since Thomas Cavendish a century before.

A second trading voyage to the West Indies resulted in a mutiny and a change of occupation from trading to piracy. Dampier remained with the ship until the end of his term of employment, but upon returning to London and asked for his back wages, he was instead accused of aiding the mutineers and received no money.

From early in his career, he had kept a regular journal where he recorded observations of the winds and tides, geography, plants and animals, and native peoples. In 1697, left with few assets besides these journals, he published his observations under the title, A New Voyage Round the World. Dampier’s account of strange foreign lands was straightforward and practical rather than sensational, and proved extremely popular among merchants, statesmen, and scientists, as well as the general public. Within his lifetime, A New Voyage Round the World went through seven printings in English and translations into Dutch, French, and German. 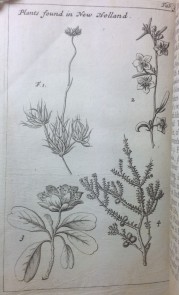 In 1699, Dampier’s fortunes were on the rise. He published a second volume under the title Voyages and Descriptions and returned to the Pacific, this time as captain of the HMS Roebuck, the first voyage intended specifically for scientific exploration. He sailed around Australia and New Guinea, discovering the island which he named New Britain before the ship’s poor condition forced him to return home, carrying with him specimens of around forty Australian plants (now in the Sherardian Herbarium at Oxford).

Once again, however, Dampier’s return home was not a happy one. He arrived in England to face a court martial for assaulting an officer on board the HMS Roebuck, and was judged to be unfit for command. He returned to the Pacific yet again as commodore of a privateering expedition during which, after a hurried refit on the island of Juan Fernandez, the ship’s master Alexander Selkirk preferred to be marooned there rather than set sail on a vessel he did not believe to be seaworthy. Selkirk would remain on the island for five years before being rescued by another privateer vessel commanded by Captain Woodes Rogers and piloted by none other than William Dampier.

Views of the Brazilian coastline in A Voyage to New Holland… (London, 1703).

Although Dampier and Selkirk had grated on each other’s nerves during the earlier voyage, it was on Dampier’s recommendation that Rogers appointed Selkirk as mate on board his ship. Selkirk’s abandonment and subsequent rescue, described in Rogers’ journal and in The Englishman magazine, are widely believed to be the inspiration for Daniel Defoe’s novel, Robinson Crusoe.

Dampier’s third book, A Voyage to New Holland, in the Year 1699, was published in 1703, and contained the first description of Aboriginal Australians. Although his account unfortunately depicted them as ‘the miserablest People in the world’, his writing nevertheless sparked intense interest in the south Pacific.

Over the course of his career, Dampier would circumnavigate the globe three times, making him the first person to do so.  His books, with their detailed records of weather patterns, safe harbours, disposition of native peoples, sources of food, and advice on maintaining health while at sea, were for a long time considered essential reading for mariners and recommended by the likes of Cook, Howe, and Nelson. Dampier’s writings also inspired literature such as Jonathan Swift’s Gulliver’s Travels, and Samuel Taylor Coleridge’s “The Rime of the Ancient Mariner“. 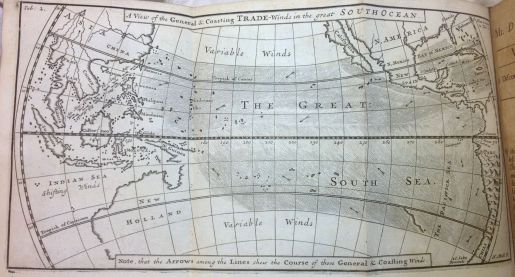 Voyages and Descriptions includes “A Discourse of Trade-Winds,” which was used in compiling Admiralty Sailing Directions as late as the 1930s.

His was the first English language description of breadfruit, plantain, and bananas, and it was Dampier who first introduced the words “barbecue” and “chopsticks” into the English language. His legacy lives on in the names of Dampier Strait in Papua New Guinea, Dampier Land in Western Australia, and the Dampier Archipelago off the west coast of Australia. 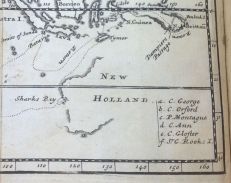 At the time of Dampier’s expedition, much of Australia remained uncharted.

Cardiff University holds the fifth edition of A new voyage round the world (1703), third edition of Voyages and descriptions (1705), and the first edition of A Voyage to New Holland, in the Year 1699 (1703). Although they belong to different editions, they are bound uniformly as a set and bear the property stamp of “T. Falconer,” possibly the English jurist and explorer Thomas Falconer (1805-1882) who served as judge of Glamorganshire, Brecknockshire and Rhayader from 1851 to 1881.