John Dee (1527-1608) is one amongthe most intriguing figures of the English Renaissance. Born in London to a Welsh family, he would become one of the most learned men of his day. His studies extended to nearly every area of learning, but especially mathematics, astronomy, navigation, alchemy, astrology, and Hermetic philosophy. He worked with Gerardus Mercator, the famous cartographer, and used his mathematical expertise to advise navigators on trade routes to the New World. Some scholars believe that his journeys to the continent to study with prominent mathematicians and scientists actually had a dual purpose, allowing him to operate as a spy for Queen Elizabeth.

In addition to his academic work, Dee had an interest in mechanical automata and created special effects for stage performances which gave rise to the rumour that he was a conjuror of spirits. A devout Christian, he vehemently denied these accusations, although today he is remembered more for his supernatural studies than his scientific ones.

While Dee’s interests were more esoteric than most, the distinction between science and magic was not as clear-cut in the 16th and 17th centuries as it is today. The disciplines of mathematics and numerology, astronomy and astrology, chemistry and alchemy, were closely intertwined. Dee’s preface to the 1570 English translation of Euclid’s Elements of Geometrie claims that the study of “Things Mathematicall,” particularly geometry, can be used to deepen our understanding of both the natural and spiritual world.

Dee’s preface to Euclid’s Elements of Geometrie (London, 1570) states that the study of “Things Mathematicall” leads to a better understanding of “things Intellectual, Spirituall, aeternall, and such as concerne our Blisse everlasting.”

In 1564, while studying at Antwerp, Dee published Monas Hieroglyphica, a series of twenty-four theorems interpreting the Hieroglyphic Monad, a symbol of Dee’s own devising which carried associations with both creation and unity. The glyph first appeared in Dee’s earlier text on astronomy, Propaedeumata Aphoristica (1558), but in the Monas Hieroglyphica it became the central focus of the work. One of his most incomprehensible texts, it draws parallels between and ascribes cabbalistic meaning to the physical properties of certain minerals, their governing planets according to alchemical theories of the day, and the geometry of their alchemical and astrological symbols. The result is a complex web of meaning that is not fully understood even today. 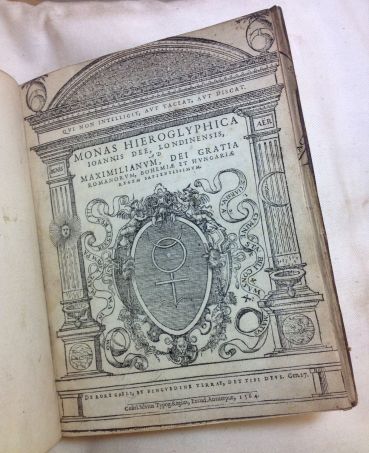 Some believe that the Monas Hieroglyphica was intended as a textbook to accompany lessons delivered orally by Dee but now lost; others believe that it is a hidden treatise on cryptography to be used in espionage. Whatever its original purpose, Dee’s hieroglyph became a cornerstone of hermetic philosophy and a significant influence on the Rosicrucians, a secret society which venerated the images of the rose (symbolising resurrection) and the cross (symbolising redemption). Dee himself is frequently associated with the Rosicrucians, although there is no evidence that he ever belonged to the society, or that it even existed prior to his death in 1608.

Dee’s symbol combines the astrological and alchemical symbols for the moon, sun, four elements, and Aries or fire.

Dee was a rescuer and collector of books, gradually amassing one of the largest private libraries of 16th century England. After the dissolution of the monasteries under Henry VIII, Dee lamented the loss of monastic libraries as centers of learning and advocated for the recovery and preservation of manuscripts and printed books that had been dispersed. The largest surviving portion of Dee’s library can be found at the Royal College of Physicians in London, where it is currently on exhibition until 29 July. In addition to the 1564 Monas Hieroglyphica, Cardiff University owns a copy of Thomas Aquinas’ Summa contra gentiles (London, 1570) from Dee’s own library and bearing his signature. Other works in Cardiff University’s collection with contributions by Dee include 17th century editions of Euclid’s Elements of Geometrie and Robert Recorde’s The Ground of Arts (a treatise on arithmetic).

This entry was posted in Uncategorized. Bookmark the permalink.