Throughout history, there have been a number of apocalyptic sects, groups who believed that the world will end within their own lifetime.  Most recently, we’ve lived through Y2K and the end of the Mayan calendar, but apocalyptic predictions are nothing new.

One example of such a prediction turned up recently in the Cardiff Rare Books Collection in a pamphlet entitled The panther-prophesy, or, A premonition to all people, of sad calamities and miseries like to befal these islands.  Published in 1661 after the restoration of King Charles II, the prophecy purports to be a vision revealed in December of 1653 to “A Person of Honesty and Integrity, but of an extream sence of the Misery … that was coming upon his country,” and is heavily laden with imagery from the book of Revelation.

In this vision, a soldier, a lawyer, a citizen, and a minister refuse an invitation to a “Marriage Supper,” an allusion to Revelation 19:7. These four admire a panther emerging from the forest, which proceeds to devour them entirely. In the meantime, many people abandon the “City,” heeding God’s warning to withdraw from Babylon (Revelation 18:4). The panther then excretes the four men it devoured, who are transformed into a duke, an earl, a baron, and a bishop, who pick up and support the panther. With the “poor People” hiding in the forest, the panther grasps a “Godly Man” by the throat, at which time Christ descends on the clouds and shoots arrows into the panther and the four men supporting him. As the panther’s supporters flee from Christ, the people emerge from the woods saying “The Lord Reigns,” a voice declares that Babylon is fallen, and the City burns.

The English Short Title Catalogue identifies this pamphlet as a “Fifth-monarchy tract”, relating to a millenarian sect which had centers of strong support in London and in Wales during the 1650s and 1660s.  Fifth Monarchists were named in reference to a prophetic dream in the Book of Daniel (chapter 7) in which four beasts, symbolizing the four great empires of the ancient world, rise and fall, to be superseded by the fifth empire of Christ. This empire would last for 1,000 years (Revelation 20:3-5), culminating in the Last Judgement. Although many orthodox puritans held similar beliefs, the Fifth Monarchists believed that current events, especially the execution of King Charles I in 1649, signalled the start of the Biblical apocalypse. They believed it was their mission to overturn worldly government and establish Christ’s kingdom through their own efforts, going so far as to organise uprisings in London in 1657 and 1661. After the 1661 uprising, most of the revolutionaries were captured and killed or imprisoned, but a few pamphlets in support of the movement continued to appear, including the Panther Prophesy.

Before I learned about this pamphlet’s ties to apocalyptic sects and political revolution, however, what caught my attention was not its message but its unusual typography. Black lines divide the page up into many small panels. In those panels, the text describes objects in the vision in terms of their position on the page (such as, “In this Corner is the Portracture of a Church” or “On this side stand Four Men as it were in consultation”). The words seem to describe a picture or diagram rather than a series of events.

Each page is divided up into panels, with different objects and actions described separately in each panel.

Stage directions and short lines of dialogue are set off with tapering outlines and travel at odd angles from one panel to the next, sometimes cutting through the middle of paragraphs and sentences in other panels.  The text travels in a line from the speaker’s panel to that of the addressee, even if it must be turned upside down in the process. 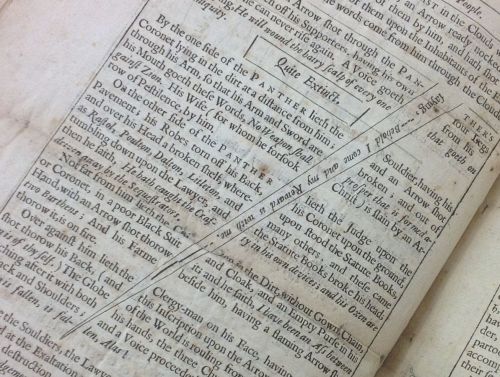 Lines of dialogue move across the page in all directions.

The text does not flow continuously from one panel to the next, or from one page to the next. Rather, each page re-paints the visual diagram for the next moment in the vision, creating a kind of textual stop-motion animation.

The text does not flow continuously from one page to the next. Instead, each page describes a single moment in the vision.

With is tableaux of allegorical figures, The Panther-Prophesy is reminiscent of the illustrated emblem books which were popular during the 16th and 17th centuries, while its unconventional page layout calls to mind graphic novels and storyboards–an impressive feat for a book without a single illustration!

7 responses to “The Panther Prophesy: A 17th Century Apocalyptic Vision”