Special Collections and Archives’ latest exhibition is curated by Dr Becky Munford and Amber Jenkins, School of English, Communication and Philosophy. The exhibition forms part of Becky’s wider research project into trouser wearing among women in Britain, France and America since the French Revolution. Becky’s website, ‘Women in Trousers: A Visual Archive’, will be launched later this summer.

The exhibition will be on display until early September. Extracts are supplied below.

The ‘bloomer costume’ was popularised by the American women’s rights activist and temperance advocate Amelia Bloomer in The Lily in 1851. Consisting of loose Turkish-style ‘trowsers’ worn under a short dress, the bloomer costume offered a ‘rational’ alternative to what Bloomer described as the ‘everlasting bondage’ of stays and petticoats. Although trousers had been worn by women in utopian socialist communities earlier in the century, bloomers represented the most radical challenge to fashionable dress because they wedded dress reform to feminist thought and political protest. 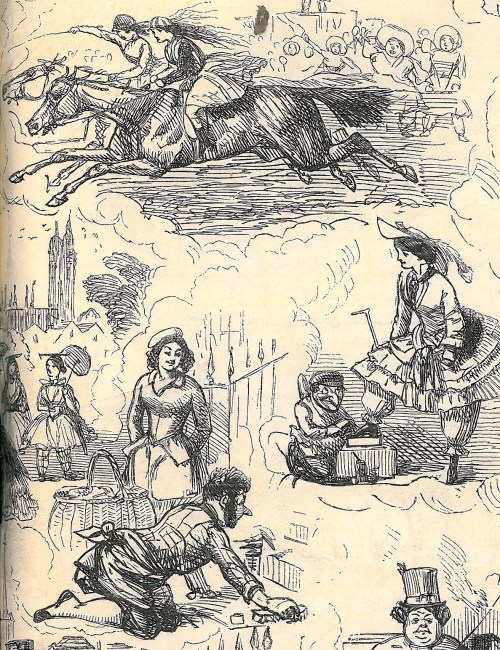 The intrigue and anxiety provoked by the sight of women wearing trousers in public unfolded across the printed pages of the popular press on both sides of the Atlantic. The British weekly magazine Punch focused its satire on the figure of the ‘strong-minded woman’, whose appropriation of trousers – a visual symbol of male power and privilege – was construed as a direct assault on masculinity. In the early 1850s, the magazine routinely offered derisive images of bloomer-clad women adopting ‘masculine’ poses, smoking cigars, proposing to men and terrorising their ‘hen-pecked’ husbands.

The bloomer costume reappeared with the bicycle craze of the 1890s, and once again became the object of Punch’s caricature. The New Woman on a bicycle not only represented new locomotive freedoms for women, but also the possibility of broader social, intellectual and political freedoms. In 1896, the American women’s suffrage campaigner Susan B. Anthony declared that bicycling had done ‘more to emancipate women than anything else in the world’.

‘The Latest Craze in Paris: Lady Cyclists as Seen at Longchamps’, The Graphic (14 April 1894), front cover.

The early decades of the twentieth century saw dramatic transformations in women’s dress to match the seismic changes taking place in the cultural, technological and political spheres. During the First and Second World Wars women adopted trousers to take up new modes of labour, working on the land, in munitions factories, as ship-builders, and as ambulance drivers and pilots, among other professions, preparing for and responding to ‘national emergencies’.

In the 1920s and 1930s, trousers became a more acceptable part of women’s attire for sports and leisure activities. Sportswear influenced the masculinisation of women’s fashion, while pyjama suits, and even shorts, became a part of fashionable women’s summer wardrobes. That trousers played a vital role in fashioning the idea of ‘modern’ femininity was also reflected in the association between trouser-wearing and smoking – trousers featured prominently in cigarette advertising of the period to suggest the freedoms promised by smoking for the modern woman.