Having just graduated with a BA in French and Spanish which I thoroughly enjoyed, I jumped at the chance to be a part of a university funded CUROP research project with the School of European Studies, examining French and British perspectives and representations of the First World War, led by Professor Claire Gorrara.

As the project title “Representing War’s End” suggests, my job was to examine the representations of the last few months of WWI, with particular emphasis on the Armistice. So with the help of the SCOLAR collections, I was able to peruse a great number of archive and print sources dating from August to November 1918 in order to provide many contrasting perspectives of the end of the First World War. The SCOLAR collections proved extremely useful in providing British perspectives of the war. Being part of a Welsh institution meant that I could access many Welsh documents, for which I felt very lucky, as they would not necessarily be on offer if research were conducted somewhere else in the UK. 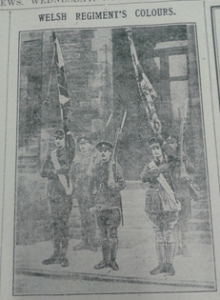 There were a vast quantity of newspapers, from Northern England to South Wales, in formats such as press cuttings and microfilm, as well as heavily illustrated, satirical magazines such as Punch and the Strand, which presented wonderful contrasts between the patriotic British soldier and civilian in the South Wales News, and the “Hun” hating allied forces shown in politically-charged sketches in Punch magazine. [image 1] [image 2].

I was able to gather many graphic images from a publication called “The War Illustrated” as well as Michelin Travel Guides for Northern France published  in the aftermath of the First World War. One of the few French sources that I came across in the SCOLAR collection which interested me very much was a collection of illustrated, short stories for children, with tales of the war, called “La Grande Guerre”. It was fantastic to find a French representation of war, after finding an amazing quantity of British sources, especially as the drawings were in colour, too. I was intrigued by the graphic nature of the illustrations, vividly depicting physical combat and death during the war , which would not be a commonplace children’s book of stories nowadays, the text at the bottom of the page is a piece of patriotic propaganda that permeates through the twelve short stories. [image 3]. 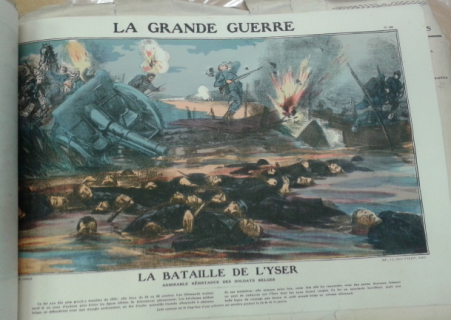 I thoroughly enjoyed this project as it is a period of history that has always been of interest, and having the opportunity to continue my studies in French as well was a huge plus. Having to compile a vast quantity of graphic files and not having excellent IT skills meant that I encountered a few problems when setting up the final database, but the end result was worth the time spent. I would highly recommend being part of a research project if the opportunity arises as it has not only added something a little bit different to my CV, but it was six weeks of perusing rare archives dating back almost a hundred years that few get the opportunity to do, outside places like SCOLAR.

This entry was posted in Uncategorized. Bookmark the permalink.