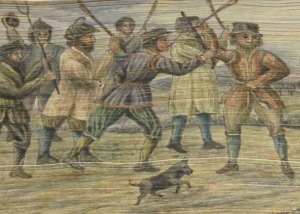 I was delighted to discover this week that the Cardiff Rare Books Collection includes two books with fore-edge paintings by the artist John T. Beer. Fore-edge paintings are watercolour illustrations applied to the outside edges of a book’s pages; the technique dates back to before the invention of printing, possibly as early as the 10th century.

A painting of George Fox, founder of the Society of Friends, arriving in Wales to a hostile reception appears on Cardiff’s copy of the third edition of Fox’s journals, published in 1765 (Weber-Beer 105).

John T. Beer was a successful Merseyside clothier and an avid book collector, who turned to fore-edge painting after his retirement and produced hundreds of works between 1884 and 1900. As he was not a professional painter working on commission, Beer was able to select books from his own collection, including several incunabula, and decorate them to his own taste. As our examples show, he often took inspiration from the contents of the book.

“John preaching in the Wilderness”: Beer’s illustration on an early 16th century Latin Bible, printed at Lyon by Jacob Mareschal in 1514 (Weber-Beer 15).

In the 1600s, some bookbinders even discovered they could paint just inside the fore-edges of a book then cover the outer edges with gilt to create a hidden illustration that was undetectable when the book was closed and visible only when the pages were fanned. Beer did not gild the fore-edges, but he did fan the pages before adding his illustration. Thus, the closed book shows a slightly squashed version of the scene, with the correct proportions only appearing with the pages are fanned open.

The “open” scene on Fox’s journal. The artist would have fanned the pages and gripped them in a vice before applying the watercolour.

Beer did not sell any of his works in his lifetime and left more than 200 fore-edge paintings and painted bindings when he died. His entire collection was sold by Sotheby’s auction house in November, 1903, when these two volumes were apparently purchased for Cardiff Library.

Fanning the pages of the Biblia Sacra to show the more “open” illustration.