In the footsteps of Dante

In 1302 the Italian poet Dante Alighieri, author of the Divine Comedy, was permanently banished from his beloved Florence, the city of his birth. Forced to spend the rest of his life in political exile, Dante travelled throughout Italy wandering from city to city, and was eventually inspired to write about his journeys in the largely autobiographical Commedia. 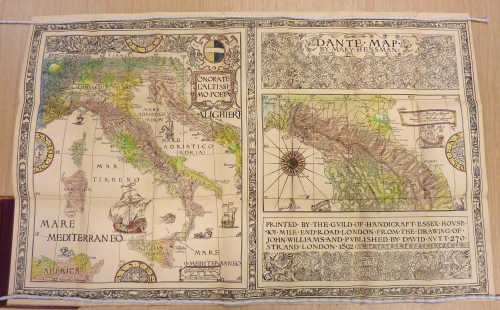 these beautiful hand-coloured maps, produced in 1892 by the English artist Mary Hensman and now held in our Private Presses collection. They include all the places supposedly visited by Dante in his exile or named in his works. The first map shows the whole of Italy in the time of Dante, “Onorate L’Altissimo Poeta”, surrounded by an elaborate border made up of Guild emblems, while the other highlights Tuscany and central Italy. 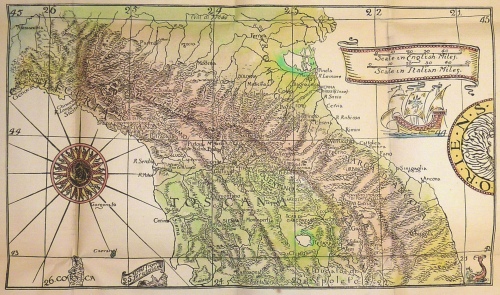 Handicraft as coloured photolithographs, printed on a single large linen-backed sheet and folded into a maroon buckram case with Hensman’s preface and gazeteer mounted on the front pastedown. The hand-colouring was apparently completed by Hensman herself with Ashbee’s assistance.

2 responses to “In the footsteps of Dante”